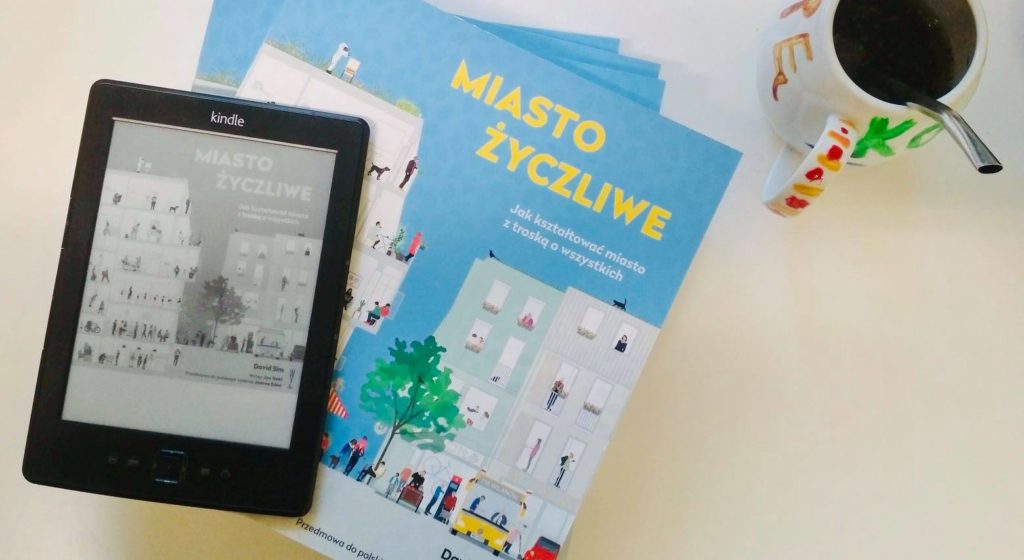 Happiness in the city, or why hygge can't be found in the countryside.

I remember the hygge boom around Christmas about 3 years ago. Polish bookstores were full of books on the subject and hygge was hailed online as the biggest trend of all time. Enchantment with the philosophy of the Danes, who incidentally are among the happiest people in the world, persisted until the Swedish “lagom” appeared. After all, Scandinavians are at the forefront of a philosophy characterised by simplicity, functionality, ecology, health, but also social relations. It is reflected in every aspect of their lives: from work, to the place where they live, to technology, services and products. A prime example of a city that combines all these qualities is Copenhagen, which I personally adore. It is also an eyewitness example of the opposite of what is happening in Poland. Unfortunately.

They are characterised by well-thought-out architecture, solutions responding to the needs of the inhabitants, such as plenty of bicycle paths, lots of greenery and common spaces integrating the community, balance between work and private life (shorter working week, longer holidays), good health care, efficient and friendly city transport, no obstructions in pedestrian or wheel traffic, clean air and water, care for the environment (recycling, RES), small disparities in salaries. What also distinguishes them are the inhabitants themselves, who are very active socially until old age, e.g. an average Dane is e.g. a member of 3.5 organisations, associations and clubs and 78% of Danes meet friends, family or colleagues at least once a week (the average in Europe is about 60%). Danish or, more broadly, Scandinavian cities have for years occupied high places in rankings of quality and satisfaction with life. Their agglomerations are vibrant, attracting not only tourists but also new residents.

And what is the Polish reality?

Polish cities are becoming depopulated. For a good few years now, residents have been leaking out of urban agglomerations with a fine trickle like sand in an hourglass. GUS data for 2019, for example, show a continuing trend of depopulation in large cities such as Warsaw, Wrocław, Poznań or Tricity. At the same time, the areas of the surrounding, suburban municipalities are becoming denser. Unfortunately, this trend accelerated in 2020 with the arrival of the pandemic. Large-scale migration from the cities began. It was a kind of escape from the coronavirus. Poles exchanged flats in high-rise buildings and blocks of flats with crowded lifts for houses with small or larger gardens. The phenomenon of suburbanisation, as calculated by the Polish Academy of Sciences, costs the Polish economy around PLN 84.3 billion a year.

I deliberately compared the Polish reality to what is happening in nearby Scandinavia and referred to the Danish hygge for two reasons. Firstly, for years, as a smart city expert, I have been taking a keen interest in what is happening in cities around the world, which you can read about on my blog. Secondly, I recently finished reading the book Soft City by David Sim. It has taken the same place in my personal bookcase as The Happy City by Charles Montgomery and Copenhagenize by Mikael Colville-Andersen. It is a very valuable book. In my opinion, it should be read by both local government officials and citizens (I also see entrepreneurs, architects, town planners, investors or urban development experts in this collection). 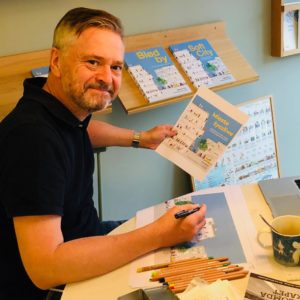 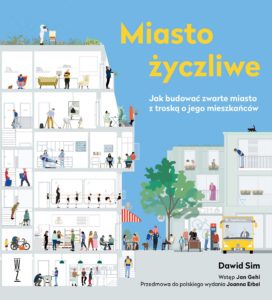 Cities during the pandemic

David Sim is a Scottish architect and urban planner who gained not only his education in Scandinavia, but also a new perspective on urban planning. “The Soft City” is his first publication translated into Polish, which I am very happy about, because it can become a real inspiration to change Polish cities!

A Soft City begins, as befits a book published in the age of pandemics, with an analysis of what has happened to cities (and their inhabitants), where there has been total construction chaos, having nothing to do with the needs and principles of social life. The dense development of newly built blocks of flats has not only deprived us of breath, but also of neighbourly proximity, access to greenery, full-scale recreational spaces and essential services. Here is one extract from the book that captures the essence of this drama:

“Cities during the pandemic have given us a hard time. Cutting off cultural life in the form of cinemas, concerts and theatres and sitting in pubs meant that what was the essence of urban life disappeared and ceased to balance all the ills of modern Polish cities: the lack of greenery, poor planning or the general ugliness of space. Cities in the pandemic were even more grey and gloomy. If you lived in an old neighbourhood, you were lucky, because usually there were remnants of good planning within walking distance: a park, a local shop or a café selling take-away coffee, which you could drink on a semi-legal bench or chair. Worse in the new neighbourhoods. Unfriendly concrete spaces with no greenery or reason to walk were proof that modern urbanity is hell. Especially where the aim of the investors, eager to make as much money as possible, was to squeeze as much usable space as possible into the flats, at the expense of green areas, common spaces or services. There we could fully feel the consequences of urban planning according to the philosophy: “pave, level, smooth”. 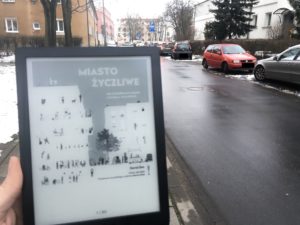 Does this mean that modern cities are becoming for us a denial of a high quality of life, in which there is no place for contact with nature, a safe space for children to play and evening silence? Can these aspects only be found in the countryside?

David Sim proves that absolutely not! In the over 500 pages of the book “The  Soft City”, we find a collection of examples (rich descriptions and great illustrations) proving that hygge can be achieved in the city. Indeed!

He also shows that escaping to the suburbs can have catastrophic consequences for us: from mental illness (separation from friends and family, social isolation and feeling of loneliness), through health (overweight resulting from commuting by car to work, nursery, school or distant shops) to climate crisis (traffic jams at inlets and exits of the city, subordination of urban space to cars).

And he says: the main aim of cities should be densification! But a densification that is resident-friendly and well thought-out, based on nine criteria formulated by Sim:

According to the author, a well-designed city should enable citizens to develop a gradual intimacy with other people, zoning the space from a private space where we can spend time alone, through a shared domestic space, a semi-private neighbourhood space, a semi-public space which we also share with random people, to a well-designed public space. Wherever we come into contact with other people, it is worth ensuring diversity: both social and functional. 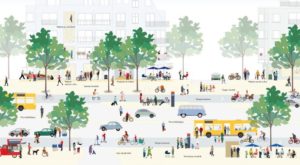 What I like about the book, as much as the ideology presented and the examples supporting it, is its formula. The author, like a travel guide, not only takes us around the city corners, but also points out the problems, analyses the solutions and presents the effects of changes. Together with him, we wander around Malmo, Copenhagen, Tokyo, New York, Barcelona, Lucerne, Mexico City, Seoul, Kyoto, Sydney, Brno, Freiburg, Stockholm, Sao Paulo, Basel, Lyon, Melbourne or London and their backyards, pavements and streets, we visit staircases, balconies, local shops and parks. In each of these places we stop and learn the nuances responsible for the happiness of the inhabitants. Sometimes it is a change in the span of the street, in another case a differentiated layering of buildings that generate more functions, and in still others, the introduction of improvements to urban transport, the creation of pedestrian avenues, a multitude of bicycle paths, low and dense development instead of high-rise buildings, or the transformation of the ground floor into active, shared spaces that integrate neighbours. This peculiar journey that we are taking with the reading of the book aims to prove that improving the quality of life in the city is easier than we think. It is enough to adjust the urban space to the inhabitants and their needs. What is more – David Sim calls on the inhabitants to actively shape it themselves, together with investors and city authorities, to become involved in creating places where they would like to live.

The author points out that “we need well-designed spaces to make neighbourhood life and the rhythm of urban life a source of joy and benefit, rather than a nuisance. Such space which allows us to reconcile seemingly contradictory needs: the need for proximity and contact with others, and the need for solitude”. And just as powerfully, he reminds us that the process of creating urban space never ends: it continues unceasingly, transforming with the lives of the inhabitants and the passage of time.

The book also deals with issues such as smart city or even dumb city, but I don’t want to spoil the reading any further. Simply: slow down for a moment, sit down with a cup of your favourite drink in your hand, read it.

And be sure to let me know in the comments if you, like David Sim, think hygge in the city is possible?