+POOL – A pool in the river in New York

+POOL – A pool in the river in New York was created thanks to money collected by inhabitants of the city.

A few years ago, a group of friends came up with a seemingly „weird” idea to build a pool in the river in New York. It was supposed to filter and clean river water at the same time.

„The idea of a pool called +POOL was born during one of the hottest days in the city” – said the authors. “New York is mostly located on islands, it is surrounded by water, and when it gets so hot, you naturally begin to phantasise about swimming in the river. However, the rivers are not very clean and swimming in them is not the best idea. We wanted to do something that could change it.”

They prepared visualisation of the idea and decided to contact selected experts and engineers who would help them implement their idea. It was significant to prepare a system of filters with no chlorine or other chemicals. The pool was supposed to act as a gigantic filter placed in the river as well as separate bacteria and contaminants thanks to coaxial layers of filtration materials which are the walls of the pool, leaving only clean, safe river water.

To fund the project, they decided to launch a Kickstarter campaign.

It turned out that they were not the only inhabitants of the city who liked the idea. Within only 6 days, they managed to collect 41 000 dollars, which was significantly more than the initial goal of 25 000 dollars. Over thousand New Yorkers supported the project. “It is an overwhelming proof that people wanted to see + POOL in the river.” – they said.

At the end of the first week of the campaign, representatives of Arup, one of the most innovative engineering companies in the world, called them and offered support of their specialists.

Collected funds allowed them to test filtration materials along the East River. Together with scientists from Columbia University, they designed a system of filters, researching it for 10 weeks in various weather conditions.

At the same time, the four friends ran an intensive campaign supporting the project. They went to hundreds of meetings with representatives of the city’s administration, consultants in the area of architecture, business and politics, non-governmental organisations and representatives of engineering companies. It was not only about supporting the idea to build the pool, but also about changing people’s attitude to urban rivers as a place in which one can bathe.

Two years later, as a part of another campaign, they managed to collect more than a quarter of a million dollars, and more than three thousand New Yorkers supported the project financially. The money allowed them, among others, to build a test pool.

Time magazine called +POOL project one of the best 25 inventions of the year.

Last year the creators established co-operation with a beer producer, Heineken, which undertook to give another 100 000 dollars for construction of the pool. The money will be used to create a light show reflecting changing water quality.

The opening of the pool is scheduled for the next year. 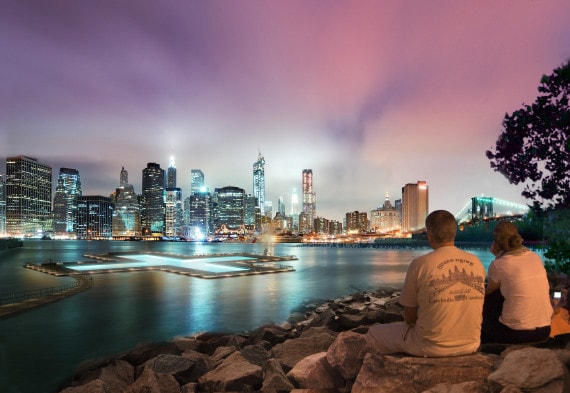 Other cities, including Sydney and Asian cities, want +POOL to be created also in other urban rivers.

„We’ve worked with engineers at Arup to study filtration systems, and with One Nature to maximize the pool’s environmental benefits.
We tested full filtration system for five months in a New York river and proved that our concept works. We gained the support of city and state agencies, open-water swimmers, waterfront advocacy organisations and over 5 000 New Yorkers who rooted for us and pledged money through Kickstarter.”

+Pool became one of the biggest social projects funded by inhabitants of the city themselves.