Does another pandemic mean ecological disaster?

Epidemiologists and scientists who have been working together for several decades have noticed a certain correlation: what all the major pandemics such as HIV, Ebola, SARS, MERS or Zika have in common is the degradation of the natural environment by human activity. Cutting down forests, draining swamps, entering new areas with investments, cultivation or farming, melting glaciers and permafrost as a result of the increase in greenhouse gases – all this disturbs the natural balance. And with it the deadly viruses emerge. The statisticians conducting the research are adding their own to the problem – predicting when such activity will bring about the end of our planet and humanity.

The ongoing pandemic caused by the SARS-CoV-2 virus is a bit of a slap in the face for us to see that something really bad is happening in nature. And that it is basically our fault. The question is: are we able to learn from this experience and will we change anything in our actions? As the researchers illustrate with figures and examples, this is not only about reducing the risk of future pandemics, but also about preventing an ecological disaster. Perhaps many of us are not aware of this…

Let these examples better explain the scale of the problem:

The human species changes the landscape and encroaches on the ecosystem on a massive scale every year. We destroy the natural habitats of animals, we hunt them, we build houses next to them, we breed cattle near their populations. As they flee, they seek new territory and thus enter the human anthropogenic environment. In this situation, animals and the viruses they carry collide with humans in new and often disastrous ways. In this peculiar mix of species, a ticking time bomb is created.

Researchers from the Ecohealth Alliance – an organisation that tracks infectious diseases around the world – have demonstrated a correlation between the conversion of rainforests into farmland and livestock farms and the number of cases of zoonotic viruses by conducting observations over the past 60 years. Among other things, they have linked past Ebola virus outbreaks to intensive human incursions into the rainforest. In one study from 2017, the scientists used satellite data to determine that 25 of 27 Ebola virus outbreaks located along the borders of the rainforest biome in Central and West Africa between 2001 and 2014 began in areas that had experienced deforestation about two years earlier.

Studies have shown that there were many more such cases. The mixing of wild animals with farm animals or humans in the same territory caused the transmission of viruses and thus epidemics of diseases such as: Ebola, SARS, MERS, HIV, ZIKA, malaria, Lyme disease. 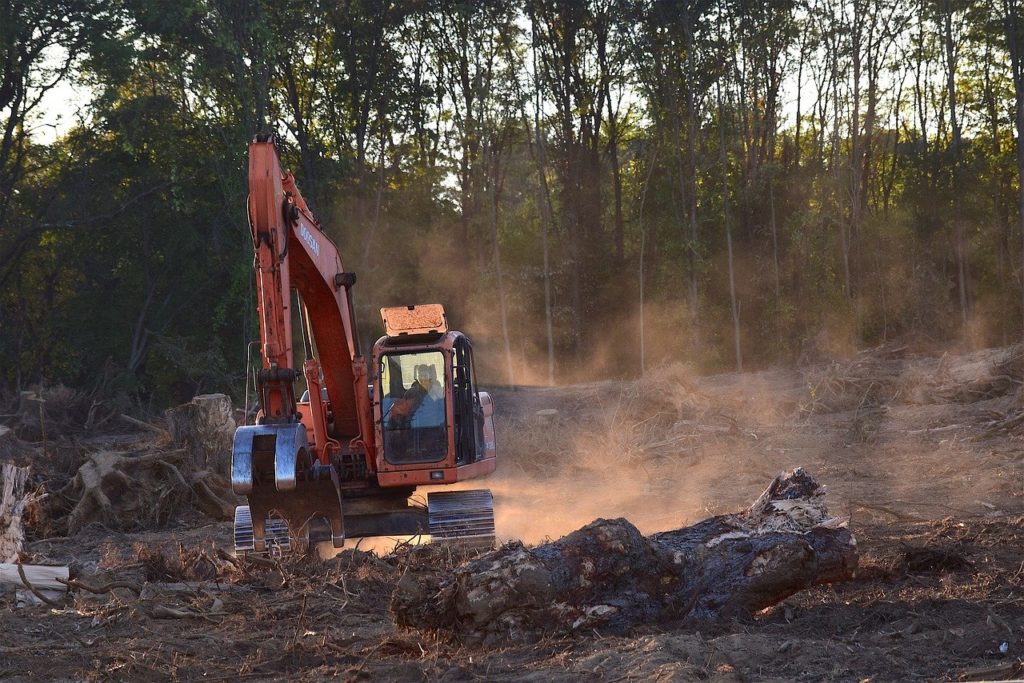 Unfortunately, the further we go into the forest, the worse the situation looks, because we reach places where wild animals live, that have never before had any contact with human civilisation. The wild creatures living in the forests are carriers of various bacteria and viruses, most of which are not dangerous for them – they do not attack their hosts, because they have evolved together with them. However, they can be very dangerous to the human body, domestic animals and farm animals. This has been clearly demonstrated by the SARS-CoV-2 virus, as well as by the analyses of biologists who, in recent years, while studying bats, have discovered dozens of coronaviruses previously unknown to science. It is not yet known how dangerous they may be for humans.

As the scientists emphasise, we should not only fear live wild animals. Some pandemics have been triggered by contact with their meat. So-called ‘bushmeat’ is not only food for rainforest populations, but forms a large part of the illegal trade in live animals and their meat. Smoked monkeys, blackened python pieces and antelope hams are portioned out and mixed with ordinary meat. In this way, every year, according to estimates by the UN and Conserv Congo, an organisation which prosecutes poachers and wildlife traffickers, between 5 and 15 tonnes of this type of ‘game meat’ ends up in the Americas and… Europe, mainly in Brussels, Paris and London! Frightening, isn’t it?

Live animals on the so-called “wet” market are equally at risk. Young crocodiles, giant land snails, land and freshwater turtles, chimpanzees, snakes or other exotic animals are sold to wealthy private collectors. Some of them are left alive. Some end up in the pot because their meat is considered luxurious, their skins and skulls are used for decoration, and their teeth and claws are used to make jewellery.

Scientists have shown a link between this type of ‘wet market’ and zoonotic diseases. The H5N1 influenza virus, known as bird flu, and SARS have emerged.

Map predicting where in the world infectious disease may occur. Source:  https://www.ft.com/

6 MASS EXTINCTION OF THE EARTH

Back to deforestation, according to Dr. Richard Ostfeld, a disease ecologist at the Cary Institute of Ecosystem Studies, habitat degradation can also harm the host animals themselves, as it has already been observed to lower their immunity and allow pathogens to attack their organisms. In addition, biodiversity is destroyed by habitat degradation, which disrupts the natural predator-prey balance.

Furthermore, deforestation causes disruption of the water cycle, soil erosion and desertification. It may cause droughts as well as floods, as the reduction of trees disrupts the natural economy of the planet, causing weather anomalies. 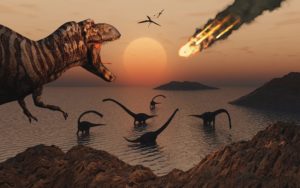 Research suggests that the Earth is now experiencing its 6th mass extinction – it’s probably not as spectacular and rapid as the extinction of the dinosaurs, but it’s happening.

As a World Wildlife Fund (WWF) analysis shows, forest animal populations worldwide have declined by 53% since 1970. According to the Red List of the International Union for Conservation of Nature, 40% of amphibians, 25% of mammals, 14% of birds are now threatened with extinction. Insects have declined by 40%. 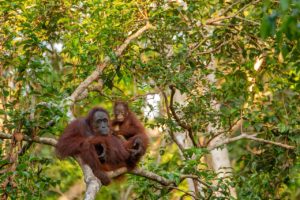 For more than 80% of all terrestrial species of animals, plants and insects, forests are their home. Most species live in rainforests because they are the oldest ecosystem on Earth. Some rainforests in Southeast Asia have existed for at least 100 million years!

The destruction of animal habitats, hunting, the spread of invasive species, climate change and disease are killing many species irreversibly. It is worth remembering that animals pollinate forest plants, sow seeds and feed the soil with their droppings. Without them, the forest slowly begins to die.

WITHOUT TREES WE WILL BECOME EXTINCT

Reading Nature Scientific Reports and a paper by two theoretical physicists specialising in statistical systems – Dr Mauro Bologna and Professor Gerardo Aquino – it is clear that the tree-felling problem could be much more serious. Why?

The researchers have estimated a model of calculation, taking into account parameters of natural resource consumption, estimates of the increase in the technological rate, the population rate and the rate of deforestation, which suggests that our civilisation will end its life in 40 years or so.

This is just a statistical point of view, but…

According to the latest report by the UN Department of Food and Agriculture, the Earth’s forest cover is just over 4 billion hectares and continues to decline. Rapid deforestation has led to the loss of 420 million hectares in just four decades, mainly in Africa and South America. The countries with the highest average annual forest cover losses over the past 10 years are Brazil, the Democratic Republic of Congo, Indonesia, Angola, Tanzania, Paraguay, Myanmar, Cambodia, Bolivia and Mozambique.

Between 2011 and 2015, around 20 million hectares of forest were harvested each year. Then things began to accelerate. Since 2016, an average of 28 million hectares have been cut down each year. That’s one forest football pitch lost every second of every 24 hours!!! (You can take a look at a counter at https://www.theworldcounts.com/stories/how-can-we-stop-deforestation  showing how much forest area is disappearing at any given time).

Calculating the current rate of felling, all trees would disappear from the Earth in approximately 100-200 years. So how come the 40 years that Dr Mauro Bologna and Prof. Gerardo Aquino are warning us about?

As the scientists point out: it is natural that human society will begin to feel the effects of deforestation well in advance of the last tree being cut down. The progressive environmental degradation caused by deforestation would seriously affect the entire ecosystem, animals, plants, and therefore the collapse of humanity would begin much earlier.

Forests are crucial for biodiversity, oxygen production, absorption and neutralisation of toxic substances such as carbon dioxide, sulphur dioxide and heavy metals, soil protection, regulation of the water cycle and food systems. They are our greatest natural ally in the fight against global warming. 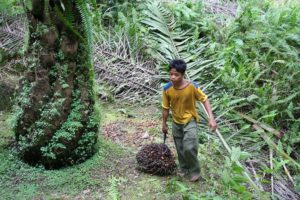 A REAL ICE SWIMMING OR S.O.S. FOR THE EARTH

Although many environmentalists are predicting mankind’s imminent end, some are looking for solutions. It is one thing to consciously prevent the destruction of the environment, such as sorting rubbish, avoiding products with palm oil, or reducing meat consumption. Large-scale action is undoubtedly much more effective.

A multidisciplinary team of scientists from the US, China, Kenya and Brazil calculated that a global investment of $30 billion a year for forest protection programmes could lead to a 40% reduction in global deforestation in areas most at risk from the spread of the virus, lowering the risk of another pandemic and saving many species.

If this amount seems enormous to someone, it is enough to mention that, according to recent estimates, a coronavirus pandemic is expected to cost the United States alone around $16 trillion over the next 10 years (cost of lost production between 2020 and 2025).

Now that we see how deeply connected human health and life is to the functioning of the entire planetary ecosystem, we can try to hold back our destructive actions towards nature. It’s not about keeping a pristine forest intact and getting rid of people – because that’s no longer realistic – but to start acting in a more sustainable way.

Save the planet – for us, for future generations, for animals, plants and the whole Earth. Let us try.

🇵🇱Był bal! 😊 I to naprawdę udany i dlat

🇵🇱Był bal! 😊 I to naprawdę udany i dlat