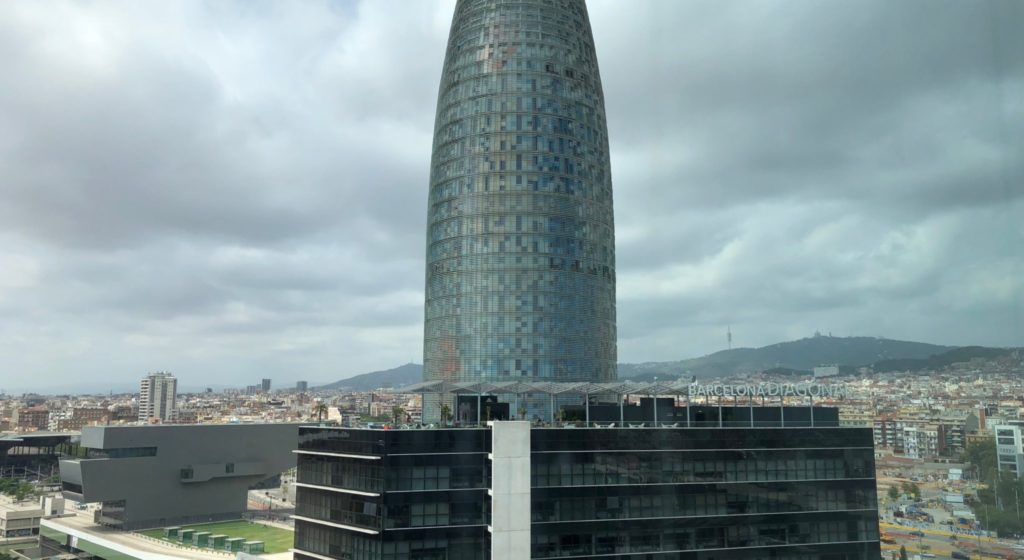 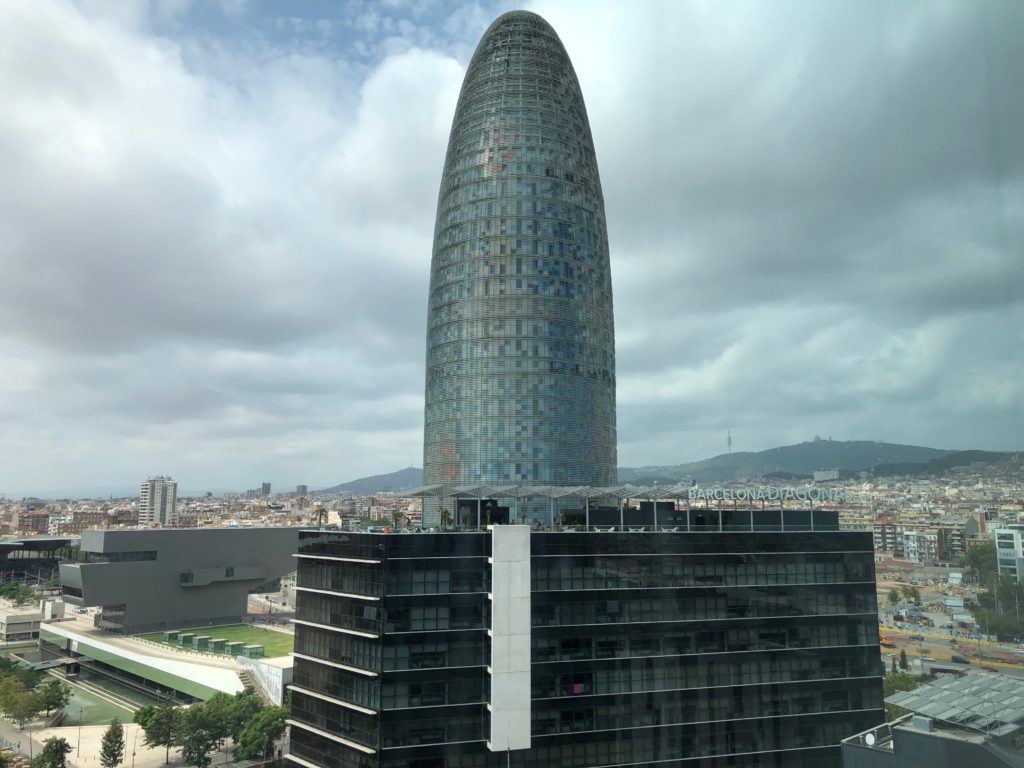 AGBAR TOWER is one of the tallest and the most architectonically beautiful buildings in Barcelona. It makes an impression, especially at night. This 38-storey high-rise building, located at the Plaça de les Glòries Catalanes which opens the way to the new technological district in Barcelona’s Poblenou neighbourhood, was designed by a French architect, Jean Nouvel. It was constructed by a Spanish company, DRAGADOS. The name comes from its first owners, an international holding company, AGBAR GROUP, which has its head office in the building. It was open to the public in June 2005. However, the official opening took place a few months later with the participation of King Juan Carlos I of Spain. 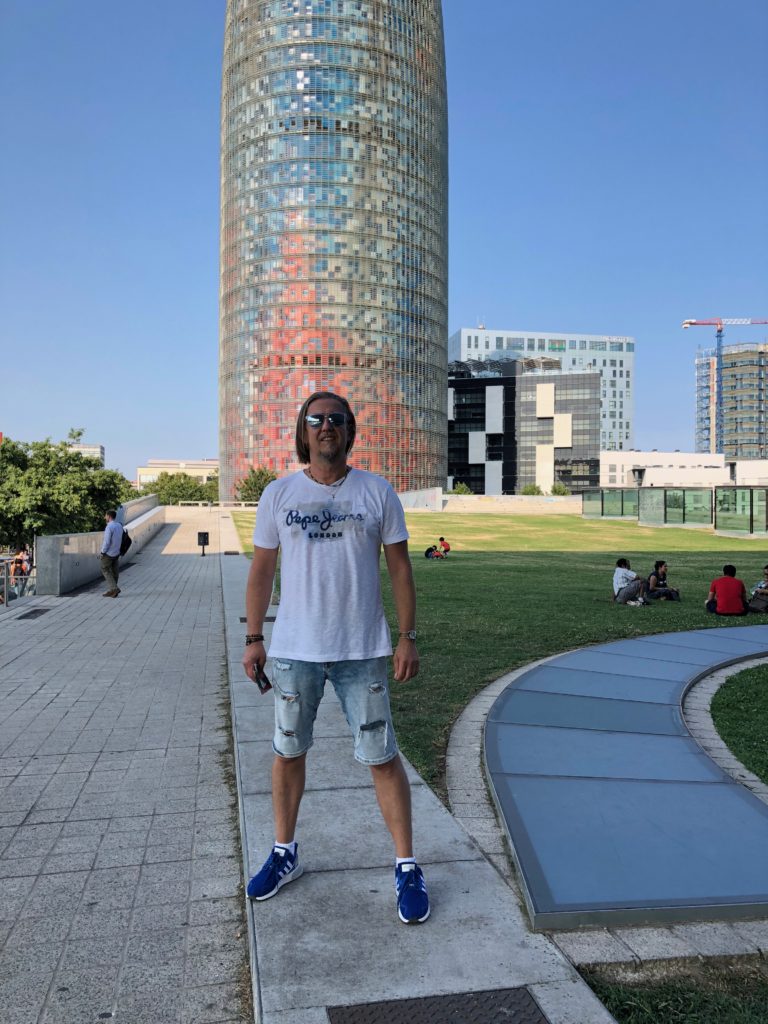 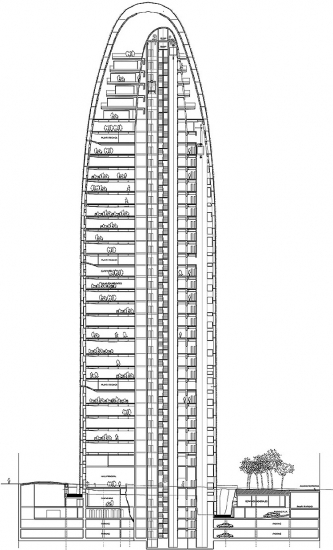 Architect Jean Nouvel wanted to capture the shape of a geyser shooting water into the air. He was also inspired by characteristic mountain peaks. Montserrat mountain range near Barcelona is of great significance for inhabitants of Catalonia. This is where their patron, the Virgin of Montserrat, used to live. The author was also inspired by the bell towers of Sagrada Família which were designed by a Catalan architect, Antonio Gaudi. 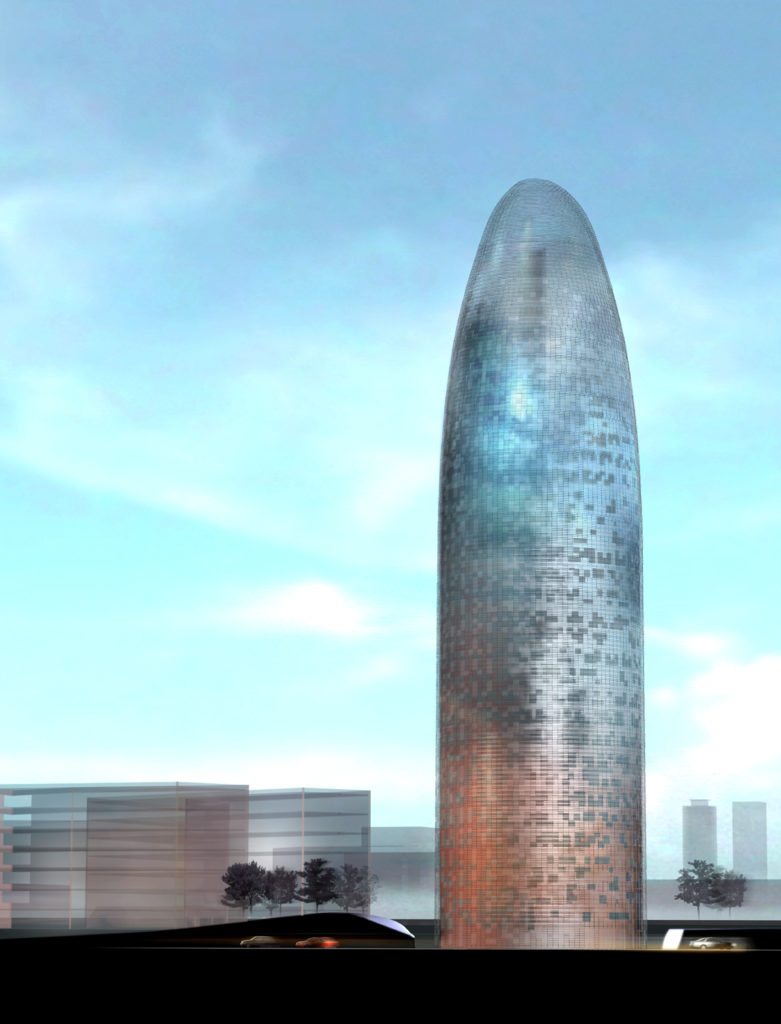 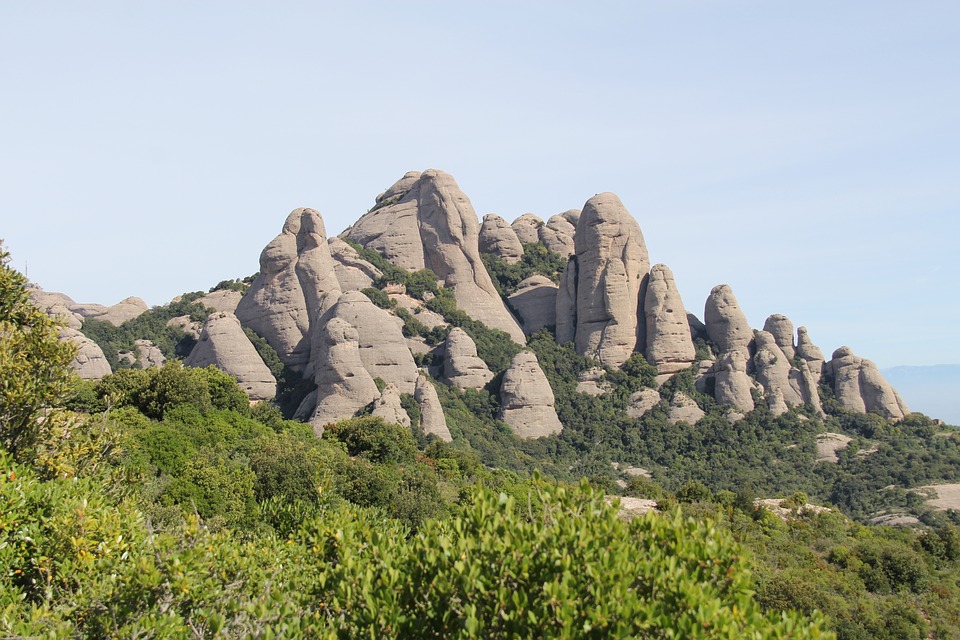 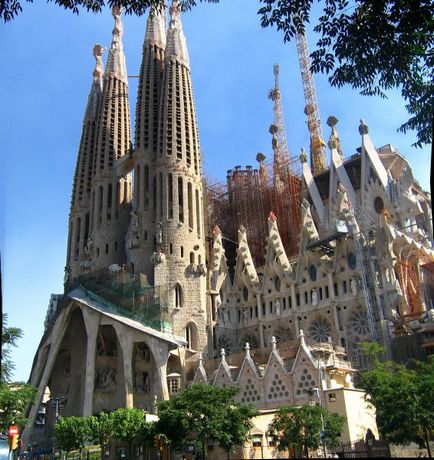 SMART BUILDING
The characteristic feature of the building is its beautiful facade sparkling in the sun and incredible night lighting. On its internal elevation there are almost 60 000 multicoloured strips of aluminium sheet covering approximately 16 000 m2 of the external surface of the building. The glass of which the blinds are made has various slopes and transparency which, combined with different shades of aluminium, changes the tower’s balance of colours depending on time of day and season. What is more, 4500 LED lights are affixed to the facade of the building. They can operate on their own and allow for generating bright pictures on the elevation. Outside the tower there are temperature sensors which regulate the process of opening and closing facade blinds constituting a part of external facade and decrease energy consumption of air conditioning. 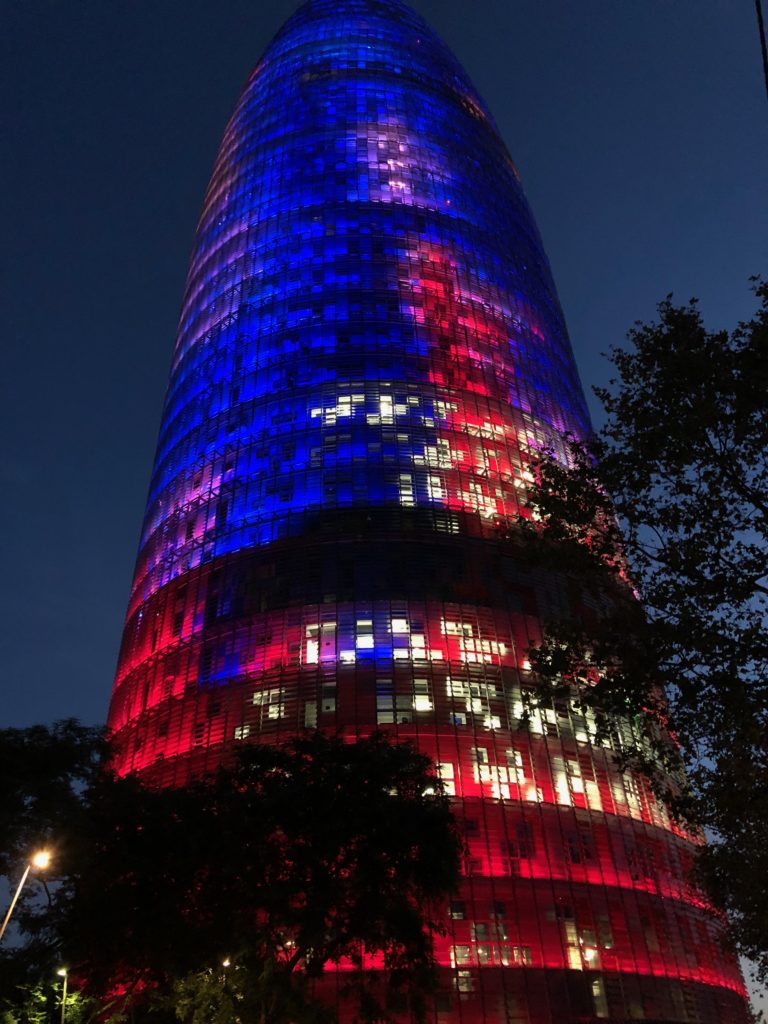 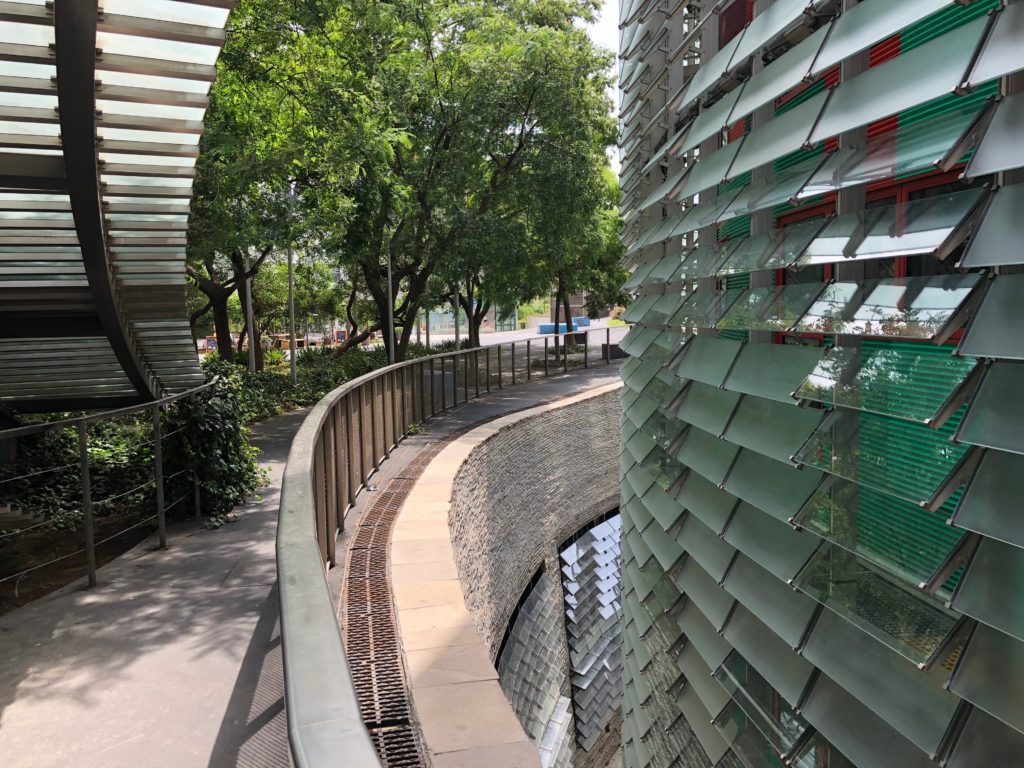 External blinds made of glass elements of various colours and transparency. 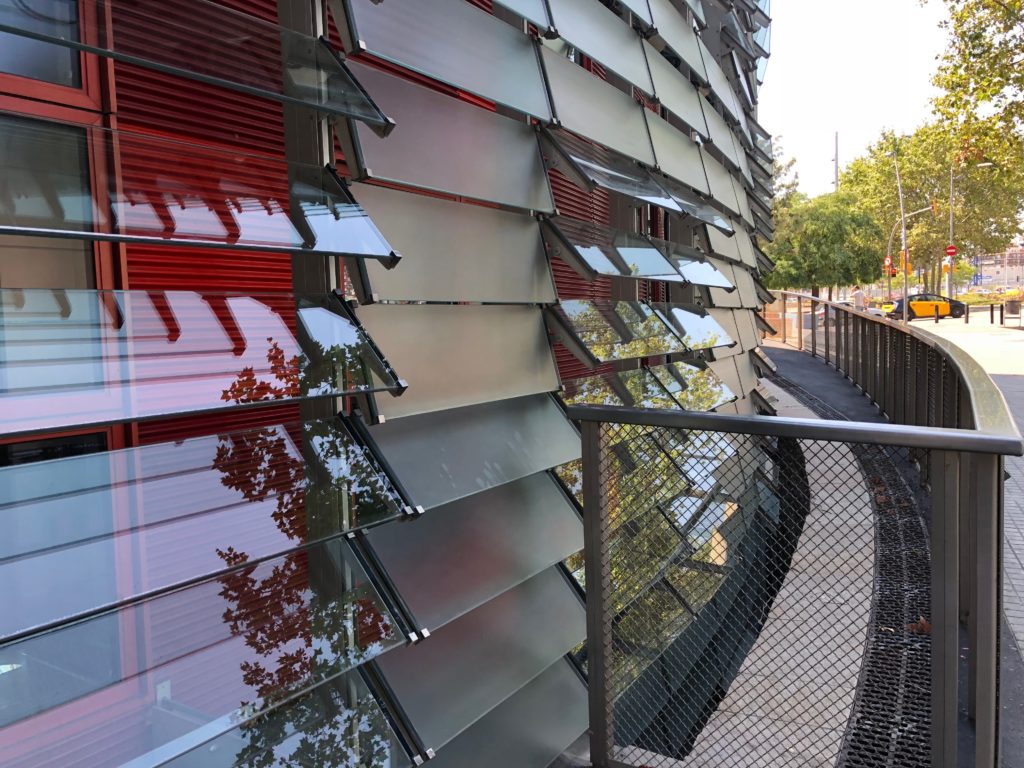 ICON OF BARCELONA
Since 2006, TV3, the main regional TV channel in Catalonia, has benefited from opportunities offered by Agbar Tower’s special lighting system and has created in the building a place for Catalans to greet the New Year. The selection of the tower as the icon of the city and the place to celebrate New Year’s Eve resulted in events in Barcelona being broadcasted all over the world just like famous events in cities such as Sydney, Madrid, Paris, London or New York. 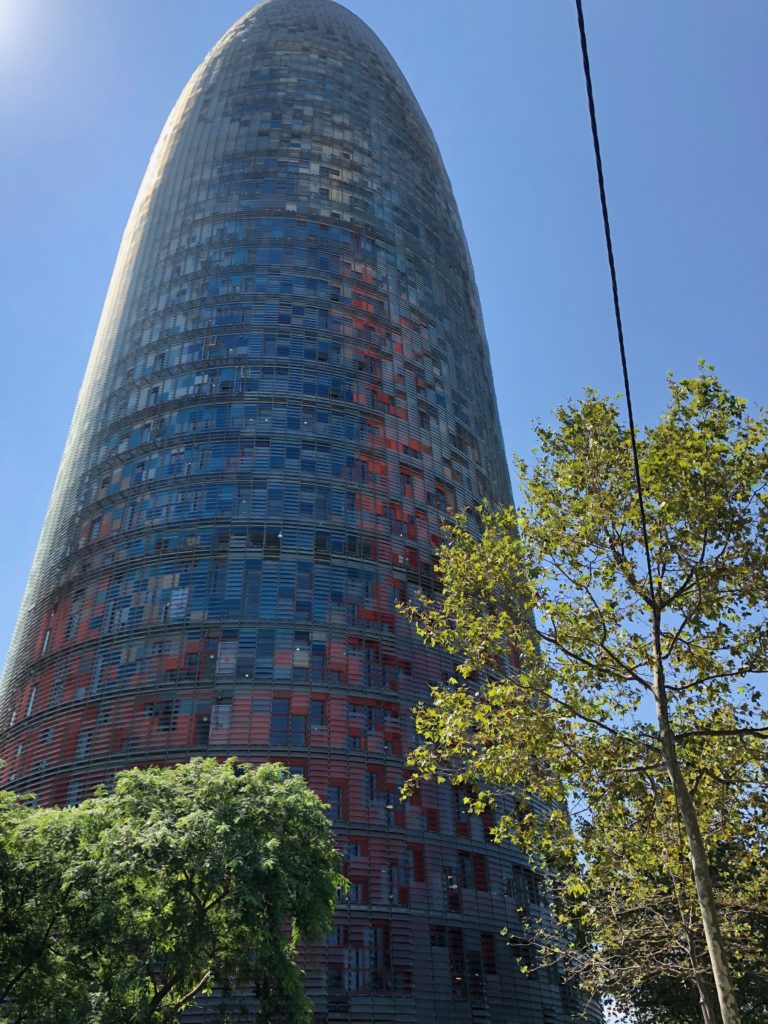 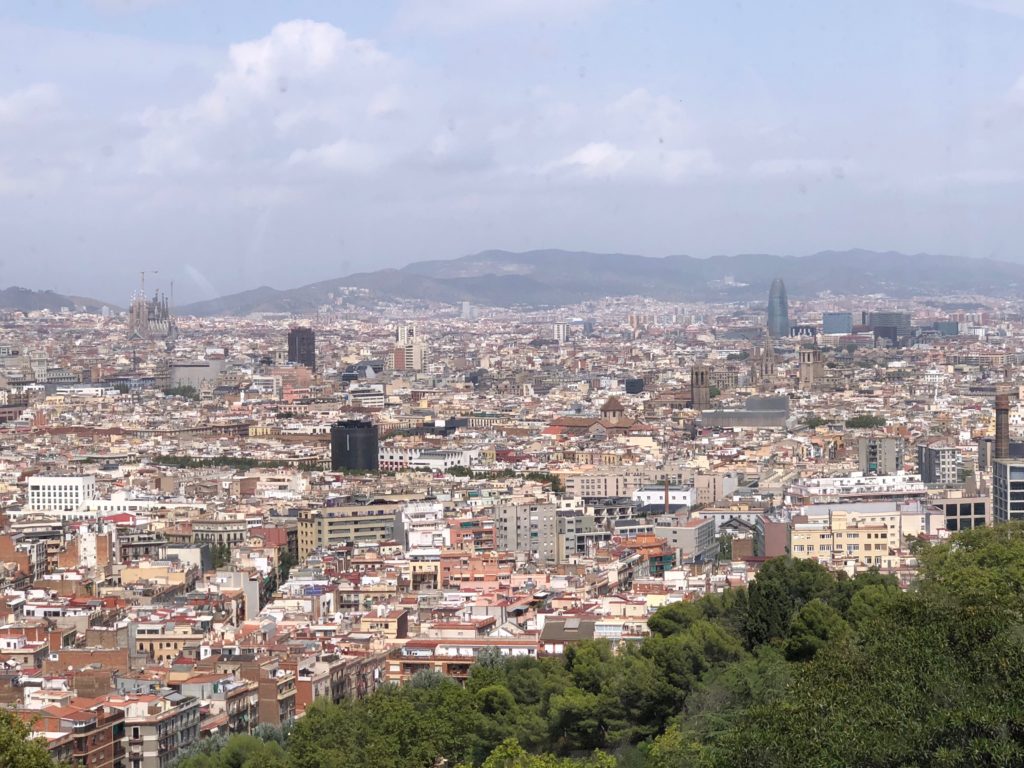 Agbar Tower is the third tallest building in Barcelona. It is visible in the background of the skyline of the whole city.

TECHNICAL PARAMETERS / FUNCTIONS
The tower is 144,4 metres high, and it has a total area of 50 693 m2, 30 000 m2 of which are offices and 3 210 m2 are occupied by technical devices. An auditorium has an area of 8 132 m2, and underground parking areas have an area of 9,132 m2. Basic reinforced concrete construction has 4500 window openings, and it is covered by elevation made of glass and aluminium. 25 000 m3 of concrete and 125 tonnes of steel were used to build the construction. The building has 38 floors, 34 of which are aboveground. On 2 out of 4 underground floors there are large auditorium halls, and on the other 2 there are parking areas. The cost of the construction amounted to 130 million euro. 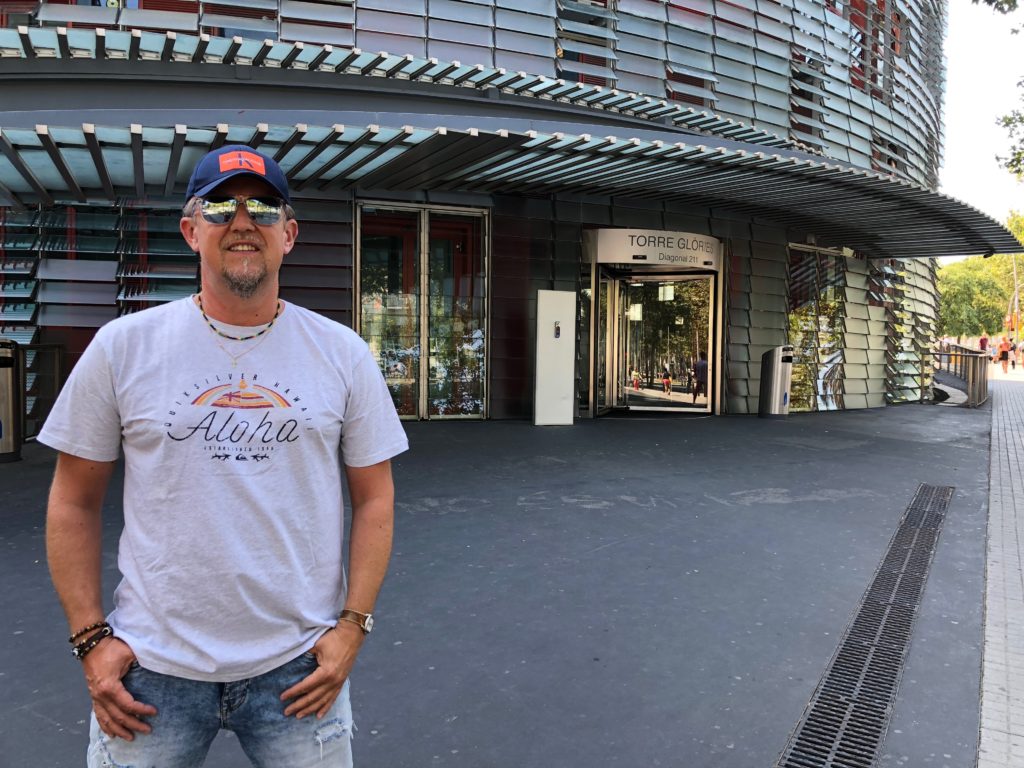 The main entrance to the building which has been called TORRE GLÒRIES since 2017. 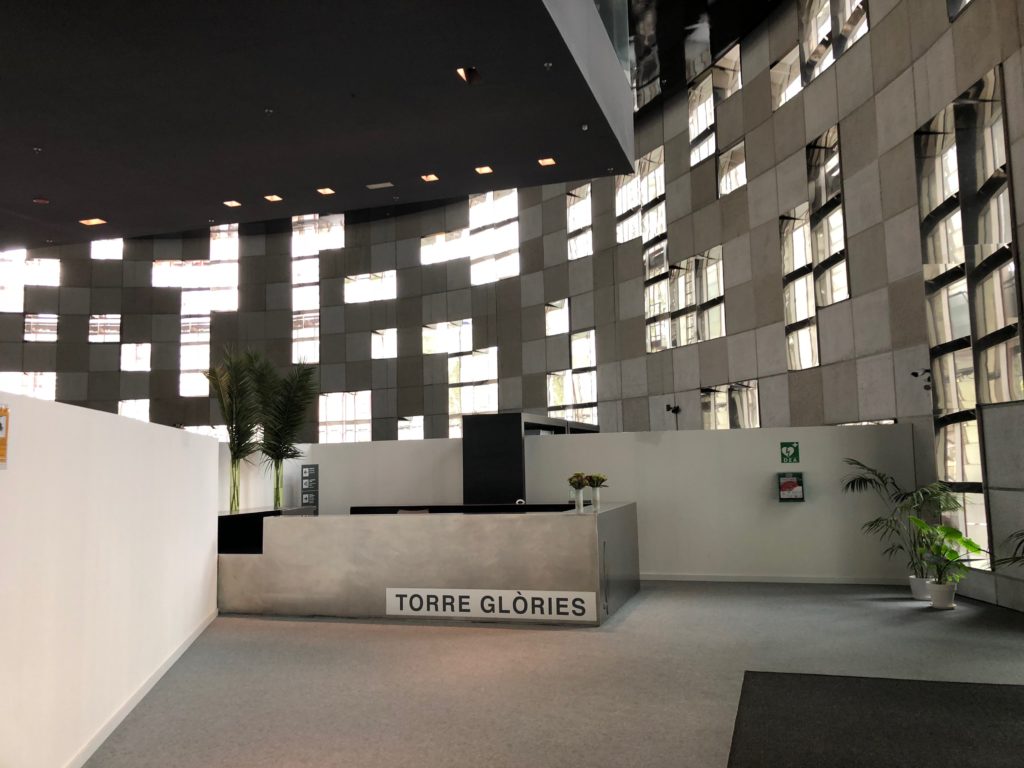 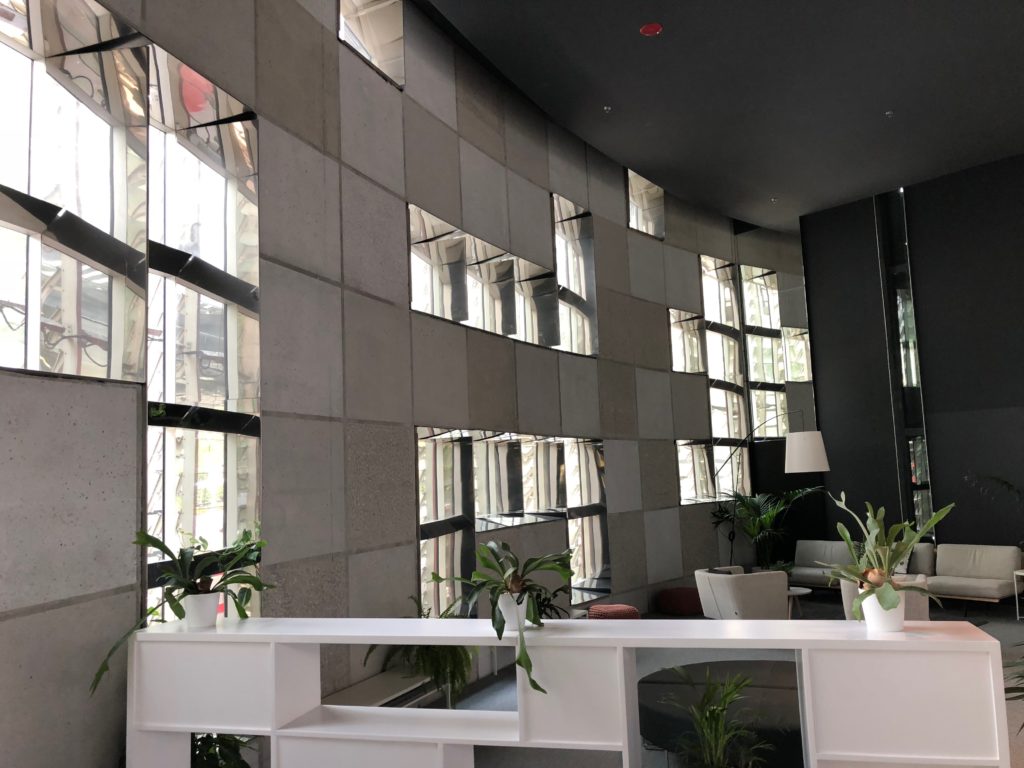 View of the main hall and reception. Visible window openings cut in the concrete elevation. 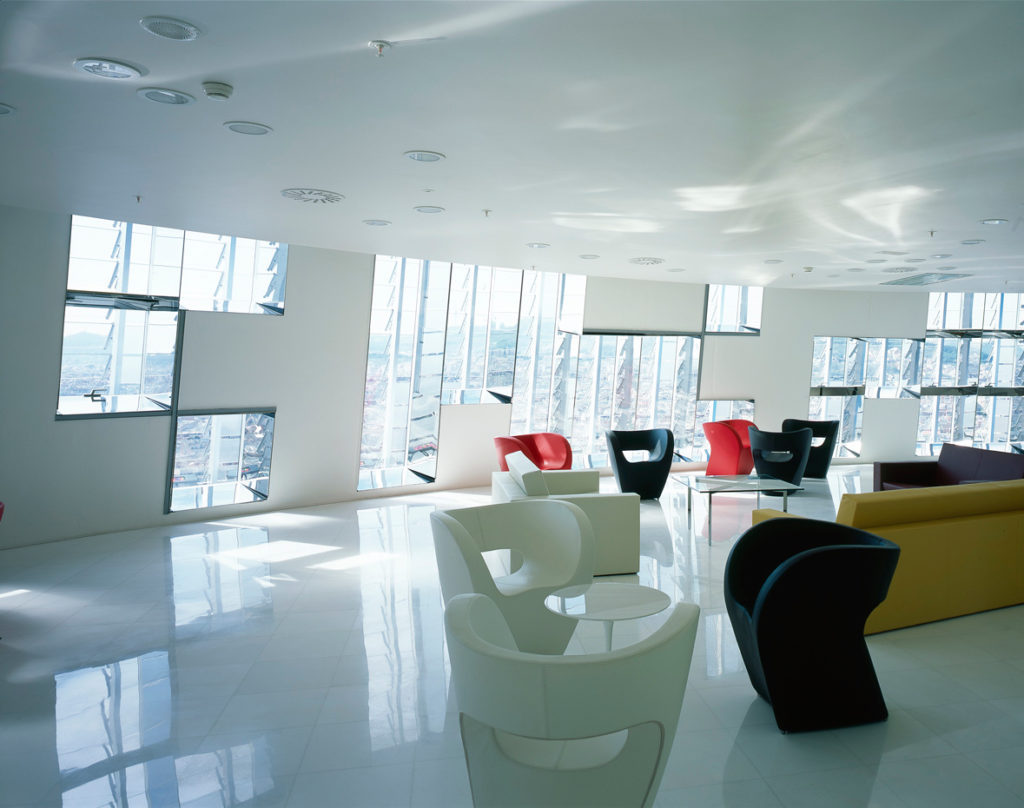 Interior of the building – the view from one of higher floors (photo from the website: http://www.jeannouvel.com/projets/tour-agbar/ 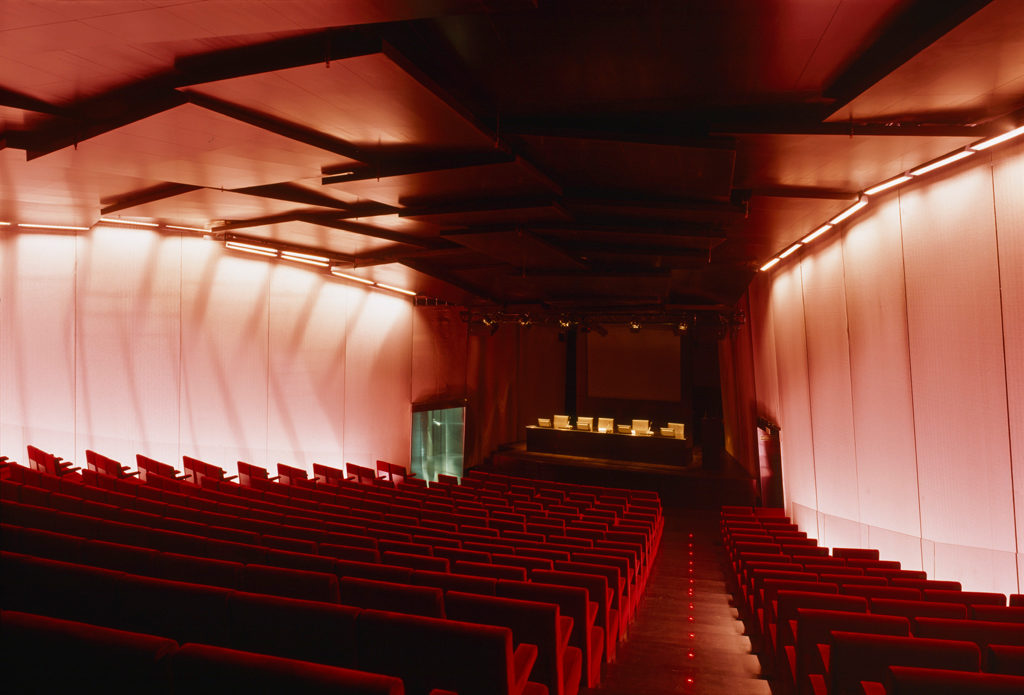 One of auditorium halls which can accommodate over 300 persons (photo from the website: http://www.jeannouvel.com/projets/tour-agbar/) 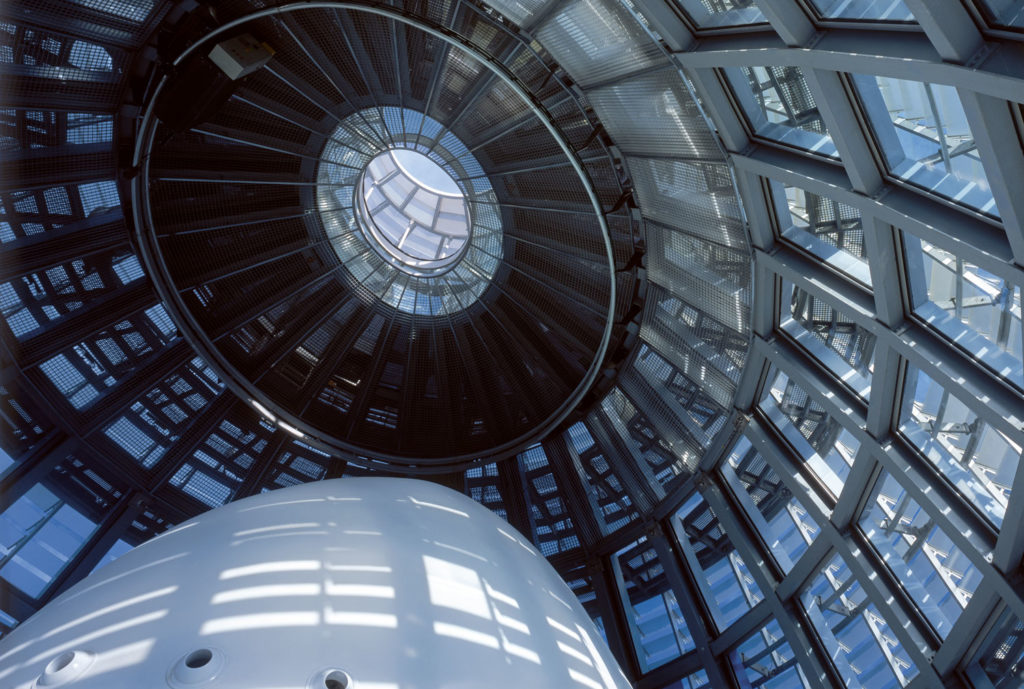 View of the roof dome from the inside (photo from the website: http://www.jeannouvel.com/projets/tour-agbar/)