Some time ago I had a power cut at home. It seemed like a trifle, but after a long time without electricity I thought how difficult it is in our modern world to do without it. We are dependent on it in almost every way. What if this short blackout lasted a little longer? Not a few minutes or hours, but a few days? Or became as natural as in the series Years and Years? Well…

We are the lucky ones – I am talking about the Poles here. Of course, we do experience power cuts, but not on the scale that has happened or is happening in other parts of the hemisphere. Over the last decade, there have been over 100 major blackouts, which have meant millions in economic losses for many countries, not to mention inconvenience for many millions of people. On a daily basis, we do not think about how much our lives, health and safety depend on electricity.

… you are driving to work and suddenly there is a massive blackout. Traffic lights go out, trams, metros and trains stop, lifts, ventilation, air conditioning and heating systems and security systems stop working, as well as pumps supplying water to houses and flats and removing pollution. Long power cuts paralyse airports, shops, schools, offices, banks, factories, mines, hospitals, prisons… You cannot withdraw money, you cannot buy the products you need, you cannot fill up your car at the petrol station…  Emergency generators are switched on in medical institutions to maintain the vital functions of people connected to the apparatus, to warm up children in incubators, or to make it possible to complete operations… It is impossible to call for help, because the telecommunications network is down without electricity (soon afterwards the batteries in smartphones stop working). Food spoils in non-functioning fridges… Shoplifting begins, riots in the streets and in prisons…

It was not a film

If the situation described resembles more the frames of a film production, I can assure you that the scenes did take place in reality. This was the case, for example, in January 2009 in the US state of Kentucky, where thousands of homes and residents lost power for more than 4 weeks due to an ice storm and 12,000 soldiers were deployed to reach people trapped in buildings, without food and water, or in March 2019 in Venezuela, where there was a nationwide blackout for 5 days and people had to burn fires to cook food and search for water in nearby rivers, streams and canals.  However, the record-breaking blackout that affected the largest number of people was in India in July 2012, which left around 650 million people (half of India’s population) without electricity for 2 days. 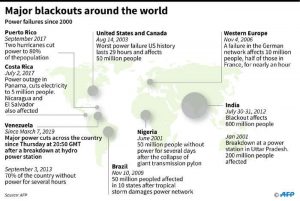 In Poland to date, the largest power failure occurred in April 2008 in Szczecin. As a result, more than 500 000 inhabitants of the city and its vicinity were cut off from power for approximately 15 hours.

We came close to a blackout in May this year, when there was a fault in Bełchatów (damage to a switchgear due to a short circuit), as a result of which 10 power units were switched off. The probable cause was human error. Fortunately, users did not feel the lack of electricity thanks to, among others, activating the operator’s reserve and using emergency imports from the Czech Republic, Slovakia and Germany. Nevertheless, the situation was very serious for us, as the Bełchatów power plant is the largest supplier of electricity in Poland. It produces over 20% of the country’s energy. It was therefore an accident with potentially huge consequences.

Major outages cause widespread and immediate chaos and millions in losses. But even these short power outages can cripple the operation of every household and almost every business.

As the world becomes increasingly reliant on digital technology, where interruptions as short as one-sixtieth of a second can crash servers and microprocessors, the negative effects will only multiply. Such brief interruptions can damage computers, pumps, fridges, traffic and street lights, security systems, trains and mobile phone towers. According to Newscientist – power outages cost up to $180 billion a year in the US, although indirect costs can be five times higher (the Szczecin blackout is estimated to have caused losses of about 50 million PLN).

Who turns out the light?

Most often the cause of blackout is a random event. In Szczecin it was a storm combined with heavy wet snowfall, which caused 4 high voltage lines to go out. In other cases it was: snow storms, lightning strikes, hurricanes, earthquakes, etc., but also human errors or even sabotage were the cause.

However, most cases are technical failures of overloaded, old power networks.  In Poland, for example, most of the power stations in operation were built in the late 1930s and early 1940s. In order to maintain the quality and safety of the infrastructure, it should be replaced by new units by around 2028. If this does not happen, as experts predict, we will face longer blackouts in Poland around 2030.

I already wrote about the megatrend of increased energy demand in a blog post 2 years ago [here] and didn’t even imagine how things would change over that time. Population growth, growing industry and new technologies (e.g. electric vehicles) and increased demand for air conditioning is causing unprecedented levels of power consumption every day. We are currently consuming over one million terajoules of energy!!!

The grids cannot cope with the overload not only of increased consumption but also of supply. We are talking about photovoltaics and allowing electricity into the grid. The energy infrastructure is one of the most expensive and modernisation is slow. This means that when energy spikes, whether as a result of one line falling and the burden shifting to the others, or as a result of injecting “green electricity” on an ever-increasing scale, or firing up the air conditioning because of a heat wave, most old networks momentarily reach a critical state and cease to be efficient.

The Electricity Infrastructure Security Council, an international body that reviews threats to electricity grids, also lists a number of human threats that could trigger massive blackouts. These include cyber-terrorist attacks or coordinated physical attacks on energy infrastructure, such as power plants, and electromagnetic pulses that can shut down power grids.

Electrical systems are complex, high-tech assemblies in which small failures can interact in unforeseen and often incomprehensible ways. Experts predict that power outages will occur with greater frequency and severity due to an upward trend in both electricity supply and demand. Supplies will become increasingly unreliable due to fossil fuel depletion, neglected infrastructure and a shift to less reliable renewable energy.

Over-consumption of energy is occurring not only because of increasing population and wealth, but unfortunately also as a result of climate change (water shortages and heat have led to blackouts in Kenya, India, Tanzania and Venezuela). By 2040, global energy consumption is expected to increase by up to 50% (some sources say 60% or even 80%)! 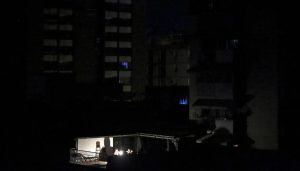 Guangdong, we have a problem

Have you heard of Guangdong? It is China’s most populous (130 million inhabitants) and highly industrialised province, called an economic and export powerhouse because its annual GDP is equivalent to the whole of South Korea. At the end of May this year, the authorities of several cities in the province asked industry to reduce their energy consumption by suspending operations for hours or even days, because the high consumption of factories combined with the hot weather is putting such a strain on the region’s energy system that it is at the limit of its capacity.

Some local power grid companies in cities such as Guangzhou, Foshan, Dongguan and Shantou have issued notices calling on factories to halt production during peak hours and even shut down for 2 to 3 days a week.

I was disturbed by this news I read on the Reuters website and I am beginning to wonder if carving out hours like this to use electricity will become a song of the future for us already? What do you think?