IMPACT is one of the most important digital economy conferences in Poland, combining science, business and start-ups.

This year’s IMPACT 2018 in Krakow attracted over 6000 participants and 250 speakers from all over the world, however, frankly speaking, the most interesting presentations in front of a full room as usual took place at the beginning of the conference. Two key-note speakers completely dominated this year’s IMPACT.

The first one was Sophia, artificially intelligent female robot with Saudi Arabian citizenship. She started the conference, took part in a panel and gave an interview in a special room – the Arena.

The second one was the Futurist-in-Chief of the Dubai Future Foundation – Noah Raford (the closest aide of the ruler of Dubai, Sheikh Mohammed bin Rashid Al Maktoum). The presentation of Dubai’s dynamic development and plans for the future, preceded by the vision of the world outlined by Hanson Robotics’ humanoid robot, resulted in Prime Minister Mateusz Morawiecki skipping the whole presentation of Polish government’s plans in the area of innovation.

After a courteous introduction concerning the chances of Polish representation in FIFA World Cup in Russia (so far, the Emirates do not have a football team as great as the Polish one – he did not know how Polish football players would perform in FIFA World Cup), he greeted the guests and wished them a fruitful session. We must admit that despite excellent knowledge of English, Prime Minister Morawiecki spoke at the international conference in Polish, which probably meant that the majority of participants were Polish. International character of the conference was preserved by foreign speakers, an excellent Indian conference host, Dan Ramamoorthy, and a moderator of conversations with Sophia, Liz Bacelar, who did not allow people gathered in the auditorium to ask Sofia any questions, despite many opportunities. 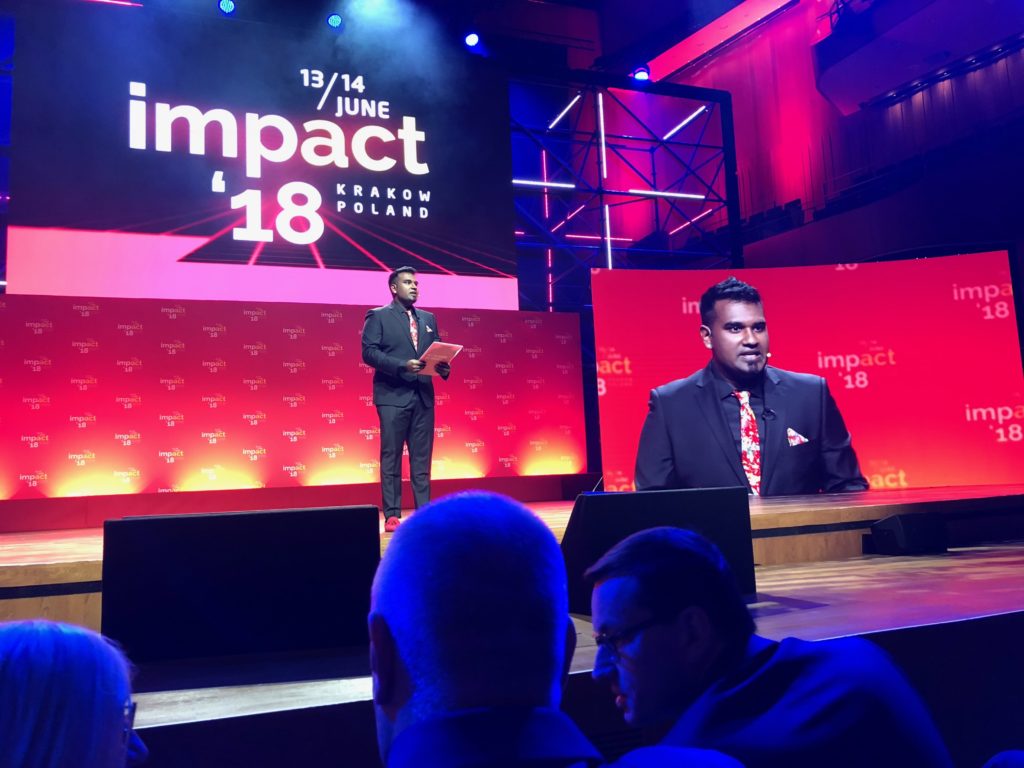 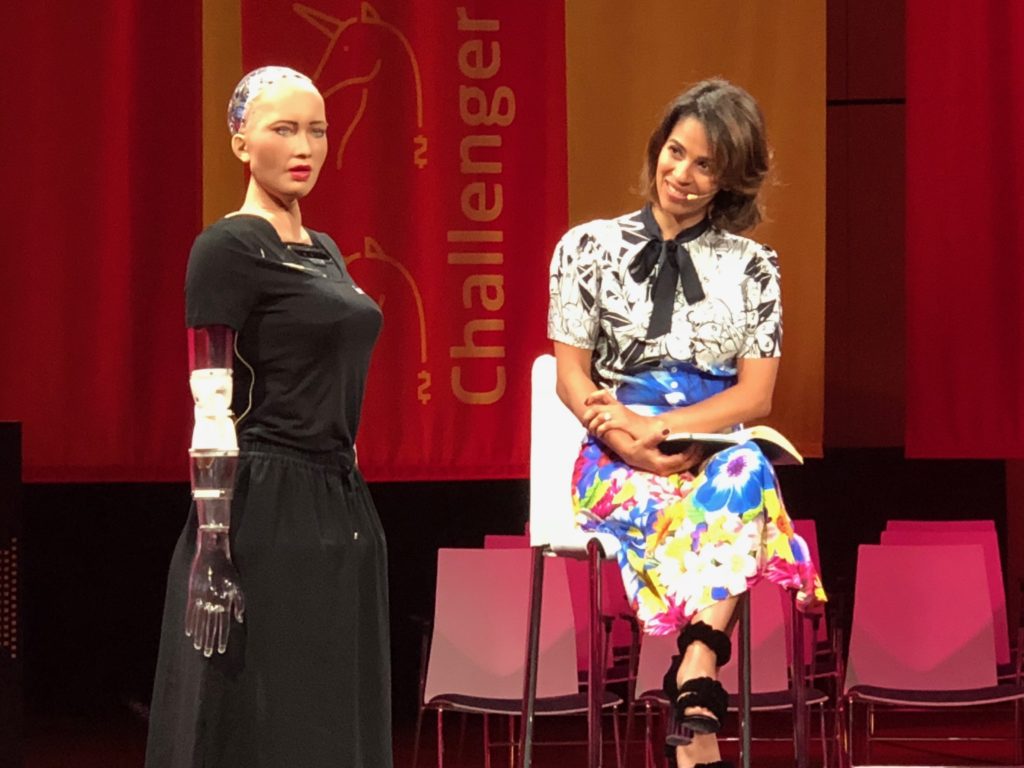 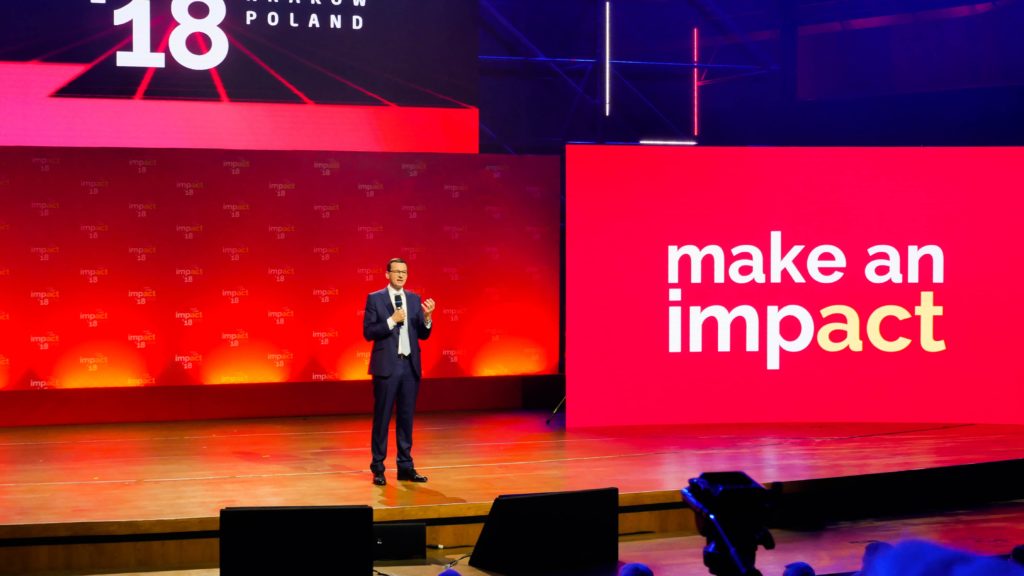 What is worth remembering after IMPACT 2018?

Presentation of NOAH RAFORD from Dubai

Presentation of the Smart City representative impressed me with a description of constructions to be built in this city. One of the most interesting buildings will be the Museum of the Future to be opened by the end of this year. However, I think that the most interesting idea and a challenge is the construction of 3D-printed houses. The first prototypes of such houses have just appeared as a part of a long-term plan created by the Sheikh and related to this project. According to these plans, by 2030 at least 25% of all houses in Dubai will be 3D-printed. One of the most important things to remember is Dubai’s strategy based on two pillars:

1. Investing in sectors in which competition is still very low, that is in, e.g. space research, creative industry and e-mobility.

2. Concentrating on projects and products in areas which are not regulated by law and partially regulated by law (e.g. 3D-printed houses), or the ones which do not have their place in the mass market yet.

And finally, the words of wisdom from the Sheikh himself:

„The future belongs to those who can imagine, design and build it. The future is not something for which one must wait, but something which must be created”. 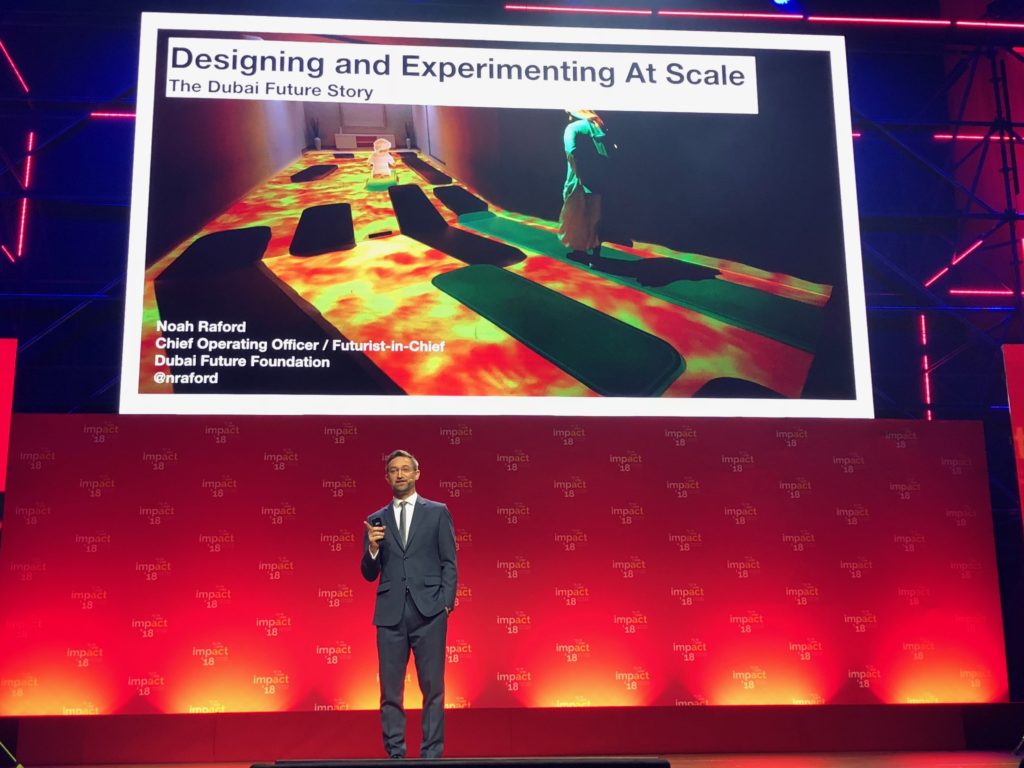 We have learned that, in comparison with the rest of the world, Poland has the highest percentage of women who graduated from technical universities and became engineers! Congratulations, girls! Apart from Sophia, the panel was attended by women representing various companies. They all complained about women in business being treated much worse than men, and in some areas – being completely excluded because of still prevailing stereotypes concerning physical abilities and the general role of women in the society. 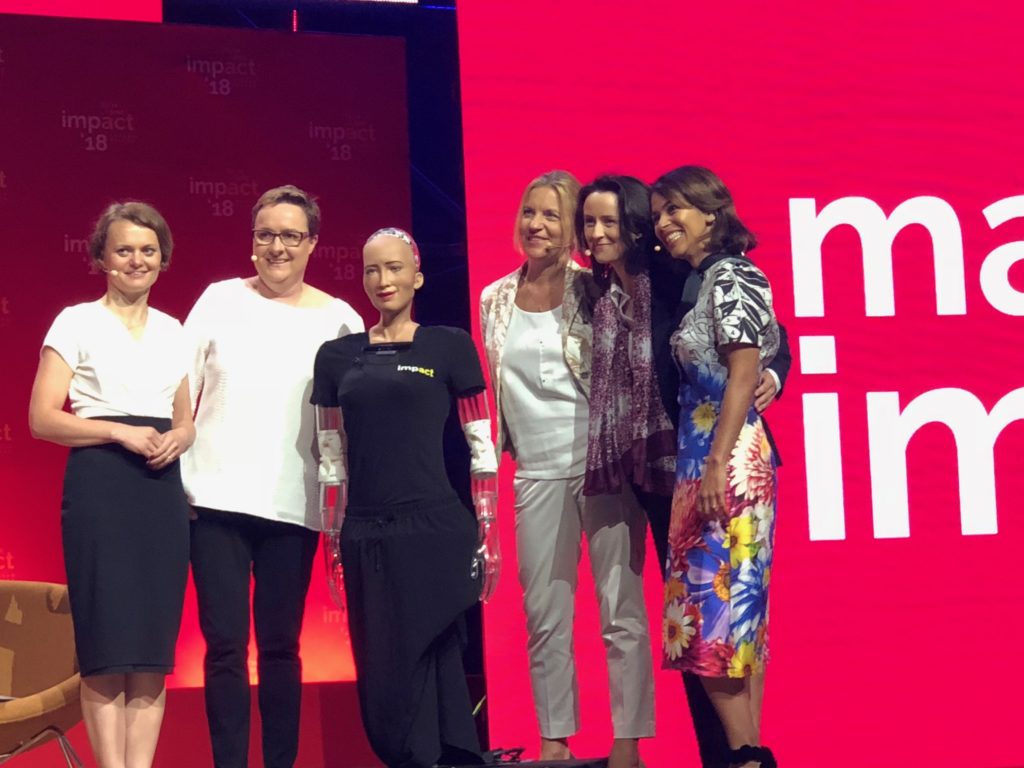 And finally, a few words about Sophia herself

We must remember that it is still a prototype which will be subject to further modifications and development. Currently, the most important challenge for producers of Sophia, Hanson Robotics, is to create a motion module, that is the one responsible for movement, and a module responsible for extending a hand and handshakes. It is said that these are very complicated operations – it is particularly difficult to adjust the handshake strength to the handgrip, shape and anatomy of a hand of a person with whom we share such gesture. And finally, I guess that the most important issue is a „face recognition” module. To those who read my articles, I have already written about this solution applied by the police and schools in Taipei. Thanks to it, Sophia will be able to remember and recognize a person previously greeted by her, linking the place, time, their name and second name, gender, height, indicative height and course of the conversation. 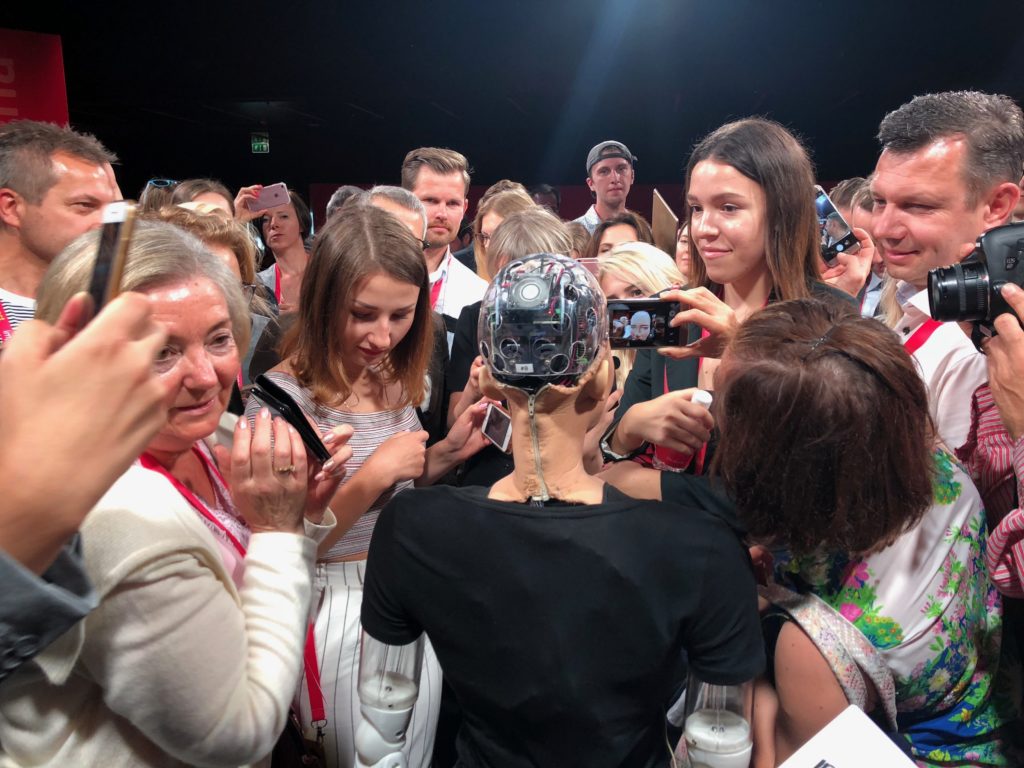 One of interesting, distinctive features of IMPACT conference was a live-act in the form of mind maps – images created live during each presentation. They took the form of the most important slogans and icons. This is how the map of my presentation, „Smart City – a city of happy people”, looked like.