New York is a metropolis of painful contrasts. Apart from huge traffic jams, rubbish strewn out on the streets, bugs in the metro and homeless people, we will also see here the tallest buildings and largest global corporations, famous theatres and art galleries. Now, can we refer to it as a smart city?

I am finding it difficult to describe that city, I cannot fathom it. New York is a melting pot, not just of various cultures but also of opposites. The contrasts are so stark sometimes that one cannot help but wonder whether this is really happening. Is this what the Big Apple really looks like? The prices of land, rent, charges for running a business, for example. One square kilometre of land in New York is inhabited by almost 11,000 people – the city’s population is higher than in 39 out of USA’s 50 states. This makes the tiniest plot of New York’s land worth a fortune. It is not only the new flats that sell at exorbitant prices but also the space above buildings, meaning… airspace. No, this is not a slip of the tongue. You can trade the vertical development rights so that the space over the existing building can be built up. Those who cannot afford to buy a roof above their heads can try and find a place to rent, but this is not easy either. The situation is no better in distant locations, e.g. a lowly bedsit in Bronx costs 1 thousand dollars per month in rental charges. This is too much even for persons in two full-time jobs. The situation with running one’s own business in the city centre is similar. Currently, the record is held by the owner of a food cart parked at the entrance to Central Park’s zoo – the annual permit to trade there costs him… $ 289,000. Isn’t this amount mad?

CITY OF THE CHOSEN

Until recently, one would hear that New York welcomed everyone and that people loved living there because they could be themselves: regardless of their sexual orientation, fashion choices, origin, creed. It is true that one can easily mix with the crowd in such a large city as NY (over 8.5 million residents). People will wear anything there. When walking on the pavement I was passed by residents wearing pyjamas, but nobody appeared to care. One can sense pervasive atmosphere of cultural freedom and full tolerance. But with the soaring cost of living (food, restaurants, flats, business), the metropolis is slowly turning into a city for the select few, i.e. for the rich. It is sad to see the demise of tiny corner shops, small family diners closing down to make room for businesses with higher capitalisation which build in their place high-rise apartment buildings or modern office buildings worth millions of dollars. Charles Montgomery said that a smart city ought to be a happy city for its residents: a city which strives to reduce social inequality and poverty. Unfortunately, New York City is becoming a metropolis with an increasing number of disproportions, which makes it far removed from a smart city for all citizens.

The homeless, pervasive filth, rubbish, rodents and insects, deafening noise – add up to an image of New York that some may find difficult to accept. These problems of the many-a-million agglomeration gnaw at the city from the inside. According to a report prepared by the U.S. Department of Housing and Urban Development, 76,501 of the city’s residents are homeless, of which 20,000 are children. The official statistics cover the homeless persons who live in the 236 shelters financed by city authorities. They do not include the thousands of people who sleep rough on the streets, in parks, under bridges, in metro carriages, and other public areas. 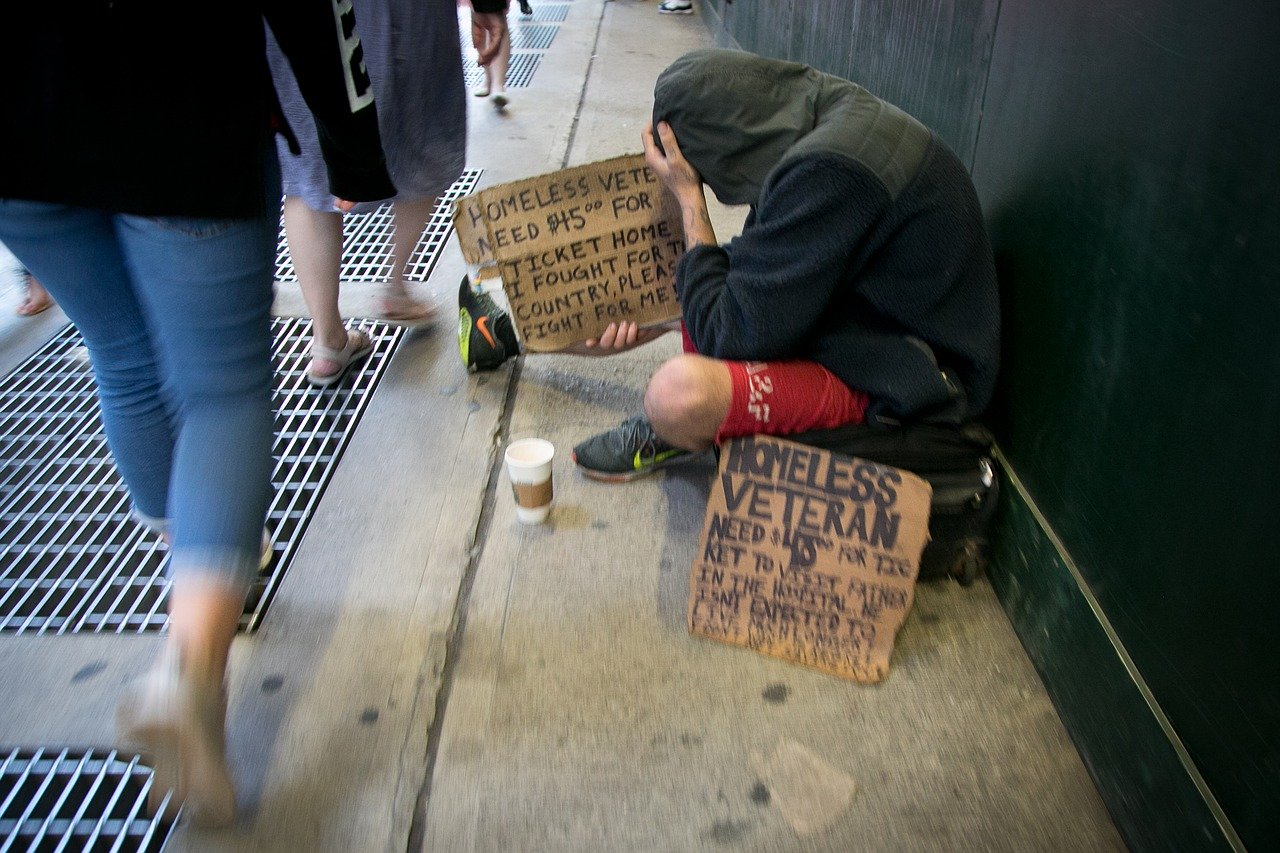 The New York Coalition for the Homeless identifies several reasons for homelessness: low pay (at least one person remains in employment in 28 per cent of homeless families), shortage of affordable accommodation, domestic abuse, unsafe housing conditions. Homelessness has a long history in New York, and the city cannot cope with it. New York’s another challenge is the overwhelming filth and rubbish scattered everywhere. A report by the Independent Budget Office (IBO) demonstrates that the NYC Department of Sanitation collects 12,000 tonnes of rubbish per day, and this is only one half of all waste generated by the city! Discarded pieces of pizza and heaps of refuse cause the numbers of rats and bugs to grow year by year. New York has been suffering a true invasion of this pest recently. The fight against it does not produce the desired effects, and its population is constantly on the rise. 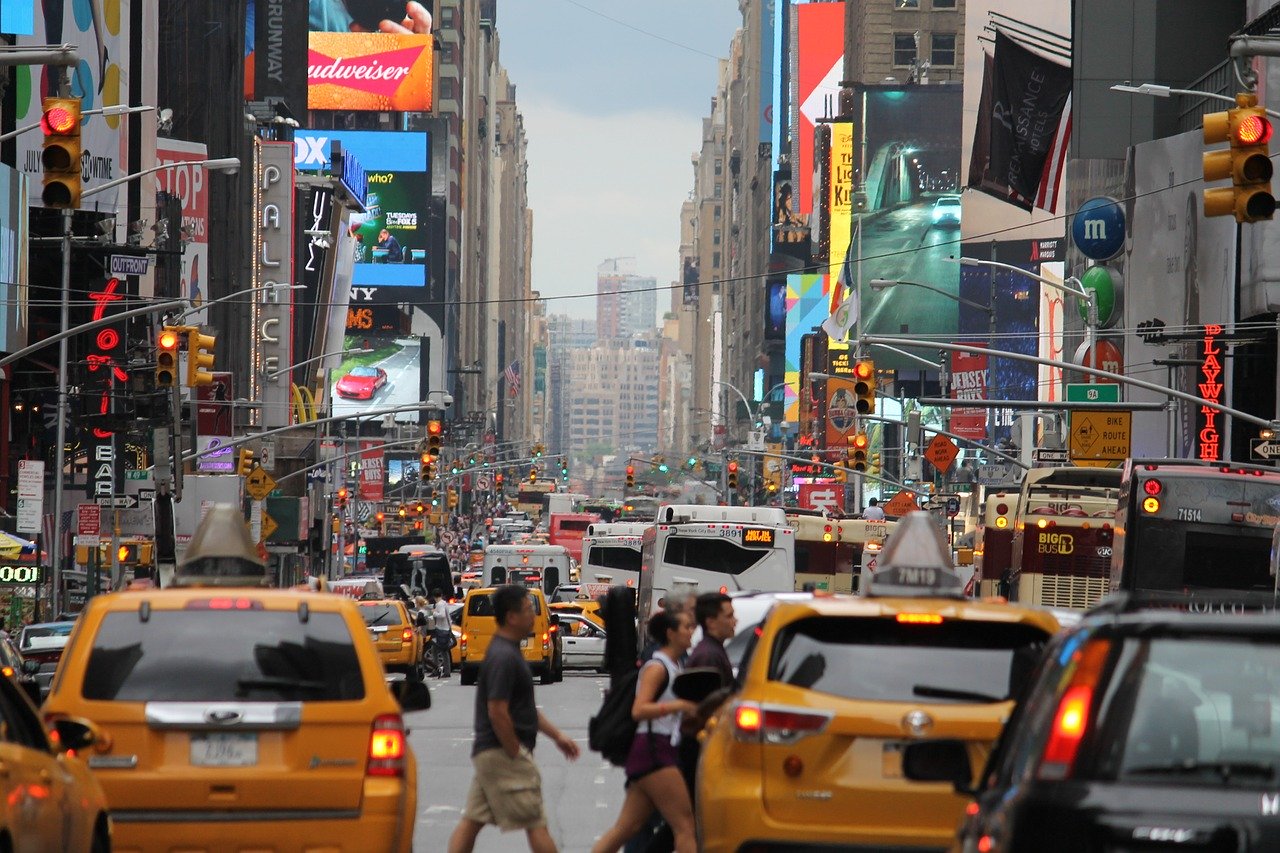 Terrible noise was what also struck me about the Big Apple. First, it is the traffic and constant honking by motorists. I am under the impression that honking is part of their culture! You honk at everyone and everything: pedestrians, other drivers, out of emotion, without a reason. Actually, a “Don’t honk” sign was introduced in the city in the year 1980, but it was soon scrapped as most of motorists ignored it anyway. The pervasive urban din is amplified by the noises of renovation work which I encountered there ever so frequently: jackhammers, diggers, road rollers are a frequent sight in New York’s streets. On the one hand, it is great that the city takes care of its infrastructure (or attempts to), but on the other all this commotion gives you a headache and makes it difficult to walk the inner centre in peace.

EVEN THE SUBWAY WAITS IN QUEUES

The Big Apple is a real urban jungle. You can get stuck in a queue even at… 3 at night. According to a ranking list prepared by INTRIX, the average New Yorker spends 91 hours in a traffic jam, and the cost of congestion is estimated at $ 20 billion per year. This is a very extraordinary paradox, when you take into account that as many as 56 per cent of New York households declare that they do not own a car (according to the US Census data). The majority of people travel by metro in New York (it is estimated that the daily number of passengers is nearly 6 million). Unfortunately, the New York City Subway is over 100 years old and is starting to disintegrate. New Yorkers are all too familiar with derailments, fires, signal failures, faulty air conditioning, lacking disabled facilities, constant delays. It can be so overcrowded that sometimes it is difficult to board the metro, and one has to wait for the next train to arrive, which might also be stuck in a queue.

SMART SOLUTIONS AND THE ECOLOGY

New York’s authorities try to address these problems. Implementation of a city bike system and a car-sharing scheme has failed to decrease traffic jams. This gave rise the idea of implementing a congestion charge scheme which will affect drivers entering the inner centre of NYC, due to be unrolled in 2020 and bring in 15 billion dollars. The city wants to spend the money on renovating the metro.

There are also bolder projects in the pipeline, like for example Loop NYC, which envisions the creation of a so called micro-highway system. The loop would consist of an expressway around Manhattan and 6 crosstown lanes across the island. Those streets would be reserved for driverless vehicles (pedestrians would use over- and underpasses). The desired effect? The journey time from Grand Central to the lower Manhattan would be cut from 40 to 11 minutes.

As for the fight against litter, over 170 ‘intelligent’ Bigbelly litter bins have been put up in central Manhattan. They are solar powered, equipped with a press and a chip which detects when the bin is full or too smelly. The information is then transmitted via the chip to the waste collection company. It is also planned to additionally install free Wi-Fi hotspots in them. The bins might also help to collect waste management data and increase waste collection efficiency by 50 per cent.

New York City is investing in intelligent city systems which improve street lighting efficiency and water management. In the first area, there is a so called Accelerated Conservation and Efficiency (ACE) programme which consists, among others, in retrofitting LED lighting in over 650 buildings owned by city agencies. These actions are expected to bring ca $ 800,000 worth of savings per year and prevent over 900 tonnes of greenhouse gas emissions. In the other area mentioned, the authorities have deployed an automated meter reading system (AMR), which is better at estimating water consumption and also sends notifications about defects and leaks.

Everything would look great, as far as the smart solutions developed for the residents and ecology are concerned, if it wasn’t for the fact that the city is devising “intelligent” rubbish bins but the shops will still pack everything in two plastic bags and even add plastic cutlery, too. Compared to such smart cities as Barcelona, Copenhagen or Vienna, where the measures undertaken by the authorities are matched by social awareness, New York City lags very much behind.