Europe’s highest fountain gushes from Lake Geneva. It is a recognisable symbol of the strength, ambition and energy of Geneva considered to be one of the best managed cities in the world. The 140-metre stream was created as a part of a system for obtaining electricity from water. Currently, the inhabitants of Geneva use 100% of electricity from renewable sources. The homeland of luxury watches is also proud of other smart solutions for its inhabitants.

Geneva has been using the motto “sustainable city” for several years. The authorities implement it by activating residents and entrepreneurs, in cooperation with NGOs and the world of science, in several key areas. Environmental issues come to the fore: renewable energy and climate, waste, water, regional planning, mobility and biodiversity. The second series of issues refers to the society, in particular social cohesion, living together and sharing. The locality is strongly emphasised. It means support for responsible and sustainable local companies. It is impossible to deny the city authorities the courage to implement various projects, often surprising and unusual. The Mayor of Geneva, Sandrine Salermo, inaugurated an extraordinary action on 16 January 2020. She initiated the feminisation of half the signalling signs at pedestrian crossings. The city is thus manifesting its desire to become more friendly, accessible and inclusive. Boldly!

I admire the fact that 100% of the electricity used in Geneva comes from RES. Hydroelectric power plants here have a history of over a hundred years. What is important, the Swiss did not rest on their laurels and thanks to many modernisation efforts and extension of the network they have reached a very high level of power generation from rivers. Already in 2018, Geneva achieved a result of 92.5% of energy production in hydroelectric power plants – located in the heart of the city of Seujet and Vessy and Chancy-Pougny. The remaining 7.5% is solar energy from 1600 solar power plants. SIG, a municipal company that supplies water, gas, electricity and heat in the canton of Geneva, is also successful in raising environmental awareness among its customers. 62,000 inhabitants of Geneva have voluntarily opted for the supplier’s proposed higher tariffs, which include a donation to the Electricité Vitale Vert fund. It has already financed more than 160 projects in the field of wildlife conservation and environmental education and the design and implementation of technological innovations in the field of green energy. Excellent! Such a motivation, as you can see, is effective. 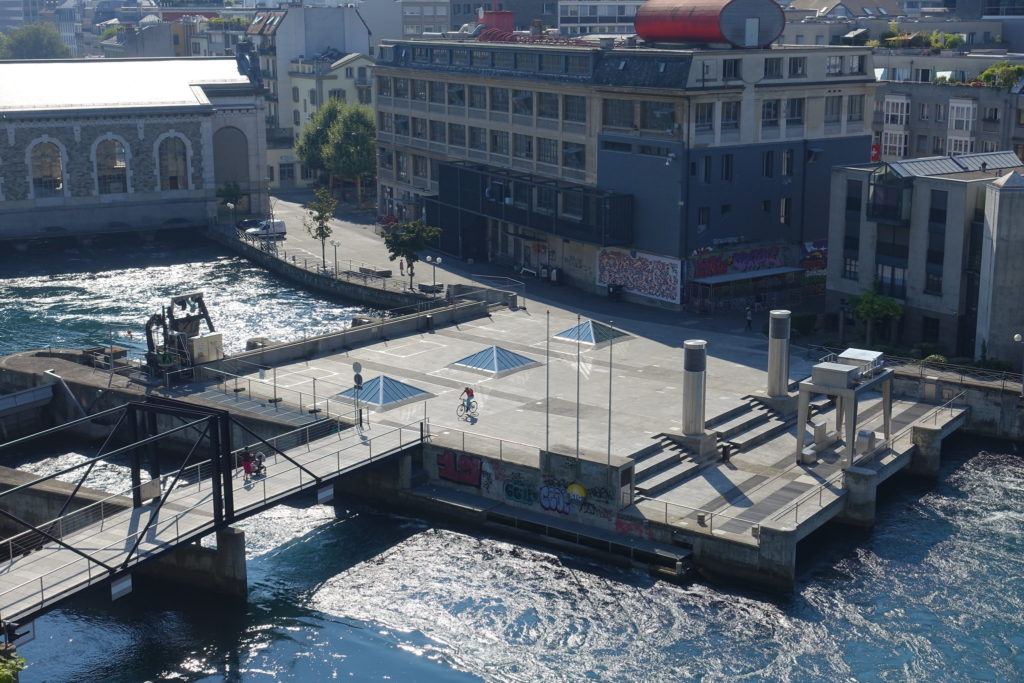 Even though the current flows like a Rhone, fast and wide, it is not wasted. Geneva participates in a project adopted by the Swiss government – the 2000 Watt Society whose ambitious goal is to reduce per capita energy consumption from 5000 W to 2000 W by 2050. I already wrote about it in the entry on Zurich. The SIG encourages residents to reduce their electricity consumption, and discounts of up to 20% are granted to customers who succeed in doing so.  Over 10 years, Geneva’s power consumption has decreased by more than 20%. In 2018, 86,000 households benefited from the bonus for saving electricity. Considering the fact that the city has less than half a million inhabitants, this is a good forecast. In terms of biogas production, unfortunately, Geneva has not achieved such results yet but it is making efforts to increase the current result of 10% use of this raw material produced by fermentation of sludge from wastewater treatment plants.

GéniLac – the genius of the lake

From 2006 to 2016, the city liquidated 88 oil boiler plants in municipal buildings. However, there is still a lot to be done here. The authorities undertook to modernise 800 buildings in the city to maximise their energy efficiency and use of RES to 100% in 2050.  Further innovative solutions are successively used to maintain the adequate temperature in the facilities. The GeniLac® System is an ingenious use of the natural wealth of Lake Geneva. Its role is to cool and heat apartments and facilities. Water drawn at a depth of 45 meters in summer enables cooling of buildings through a network of channels running under the lake. In winter, heat pumps can be connected to the system to heat buildings. The automatic control optimises its operation in real time, depending on the needs, which reduces heat losses by more than 10%. Currently, the UN headquarters, Maison de la Paix and neighbouring buildings occupied by several international organisations and hotels use this form of thermal regulation. The centre of Geneva is to be covered by the system by the end of 2021 and the airport area by 2022. It is estimated that using GeniLac® can save 80% of the energy needed to cool or heat a building. This is really ingenious!

Zero waste with an application

Since 2009, waste production per capita has fallen by 21% in Geneva. The recycling rate is also gradually increasing. Since 2016, the city has distributed over 60,000 small green baskets and rolls of bags for organic kitchen waste. Daily waste management and sorting is facilitated by the Waste Geneva application. It tells you when to take the garbage out, where and how to sort it and what to do with unnecessary or spoiled items. Residents are encouraged to limit the purchase of new equipment and the city particularly supports two solutions. It has been conducting the “Don’t throw away – repair” campaign, within which a dedicated website was created to promote workshops providing repair services. The second way is to limit the purchase and possession of equipment that is needed occasionally. Approximately one thousand of them can be borrowed from La Manivelle, a cooperative in Geneva, operating since July 2018. A grinder, a screw gun, a barbecue, an extra set of dishes for a party, a tent or a ski rack can serve many people instead of waiting in the basement for another occasion. Construction, gardening, sports and camping equipment, musical instruments, and artistic accessories in the catalogue of this municipal rental company appeared as a result of a donation, and the service is provided from donations.

Sharing is not only a way to protect natural resources but also an expression of the social solidarity developed in Geneva.

Since 1 January 2020, the use of disposable plastic products in administration and institutions such as museums, libraries and sports centres has been prohibited in Geneva. The use of straws, mugs, plates or cutlery is also not allowed during events taking place in public areas of the city. It is one of the conditions to receive the permission to organise the event. In order to convince residents to refrain from producing waste, the authorities subsidise the “Zero Waste” workshop, where you can learn how to reduce the production of waste at home, how to produce natural products or those manufactured in the spirit of recycling. I support such measures and you will read more about my approach to plastic in the previous entry explaining that plastic is not so bad.

Never too much of nature

Respect for nature and a sense of responsibility for its protection are stimulated in Geneva inhabitants in many ways. The forestation of Geneva is over 21% and the city has 40 thousand trees under its care. In addition, it subsidises other ideas for reconstructing people’s relationship with nature from public money. The “Nature in the City” Programme is also a way to appreciate civic initiatives and tighten neighbourhood ties. Housing communities, students, companies and institutions are involved in initiatives to create urban vegetable gardens, green walls and roofs. An example is the roof area of the administrative building of the Public Procurement Department. On an area of 981m², the volunteers created a green oasis with educational functions. From there you can see the richness of the flora and fauna of the Rhone shores and all its biodiversity. You can also learn how solar panels that produce renewable energy or a weather station work.

A dedicated application “Parcs Geneve” is even available, which enables to learn about 300 characteristic trees and discover unusual natural places.

What about this ecomobility?

The Préjins Pond, which was created as part of the ecological compensation associated with the construction of Palexpo, is such a unique area. This Geneva exhibition facility hosts one of the most important automotive fairs in the world. Launched in 1905, the event is a premiere site for many luxury brands that have invested heavily in electromobility and new technologies over the recent years. However, this does not translate into the expected interest in electric cars in affluent Switzerland. It is growing, but the percentage result is still single-digit, although the Swiss can expect tax exemptions for the first two years after acquiring an electric car. In the canton of Geneva, a strategy for the development of the charging network is under implementation. For over a year now, private terminal installations in places of collective or individual residence have been subsidised and companies can also apply for support.

The availability of local loading stations is indicated by the application

On arrival in Geneva for a long time one can see how the city is testing and implementing innovative solutions. Already in 2013 the TOSA electric bus, the first bus of its kind in the world, was tested on the route connecting the airport with the centre. It is worth noting its capacity and range which were achieved owing to the possibility of fast charging at 13 stops (20 s) and several minutes at end terminals. For two years now, such vehicles have been regularly carrying passengers on line 23 and are also being introduced in neighbouring France. 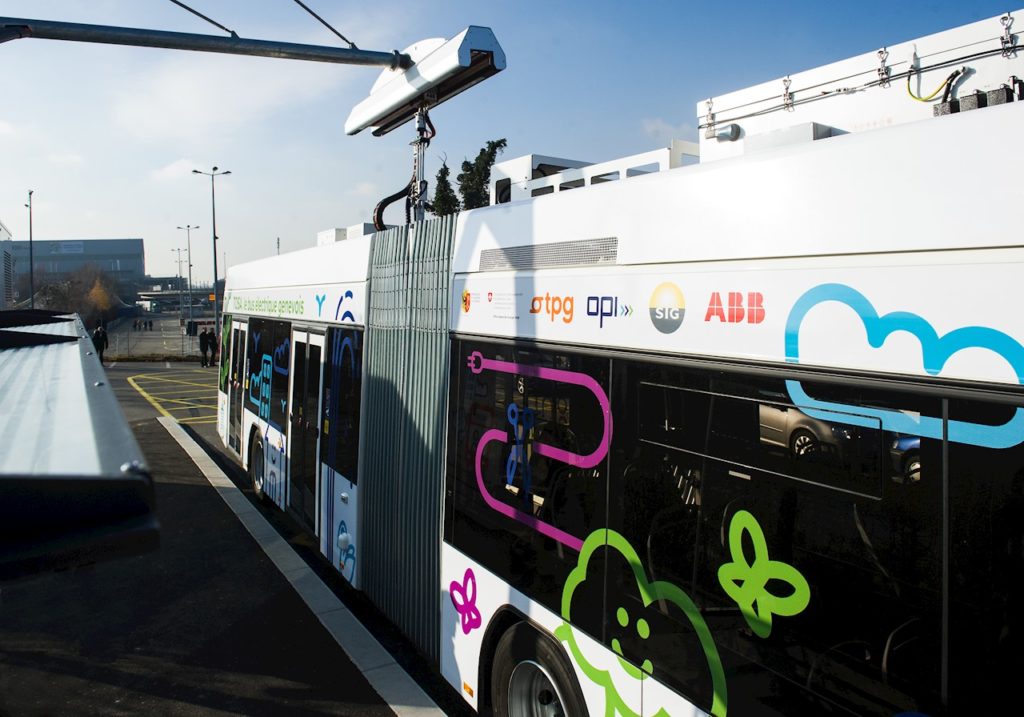 The railway network was also gradually developed to reduce the daily use of cars. On 15 December 2019 Léman Express was fully launched so that 80% of the apartments in the canton and 85% of the jobs are located less than 1.5 km from the station. Bicycle use is promoted as a complementary method to rail transport. Currently, cyclists in Geneva can use over 120 km of bicycle paths. They can also rent a bike for an hour for free, even during the pandemic. To encourage less skilled cyclists to use two wheels, the authorities subsidise the purchase of an electrically assisted bicycle and driving lessons. However, the air quality in Geneva is still not satisfactory, therefore traffic in the centre is limited. Zones “20” and “30” have been introduced, where cars can move at this speed and pedestrians and cyclists have a priority.

This is a good direction since the development of such areas improves public space and gives the streets a more human character.

Digital against the virus

The promotion of the local community, building of social commitment and the search for new technological solutions for sustainable development in Geneva have been visible for several, or even several dozen years. The Geneva Centre for Creativity has been developing innovative ideas to become concrete projects for implementation and support of the local economy. An important role of the Centre is to maintain cooperation at the interface between the academic and industrial world. Since 2016, the institution has been organising the Open Geneva event, which has evolved from a hackathon to an innovation festival and more than 1000 experts participate in workshops, conferences and debates. In 2019 the leading themes were related to digitisation in society and a sustainable city.

It seems that the Smart City conferences organised in Geneva for many years now are a good homework for the city authorities. How did Geneva impress you?