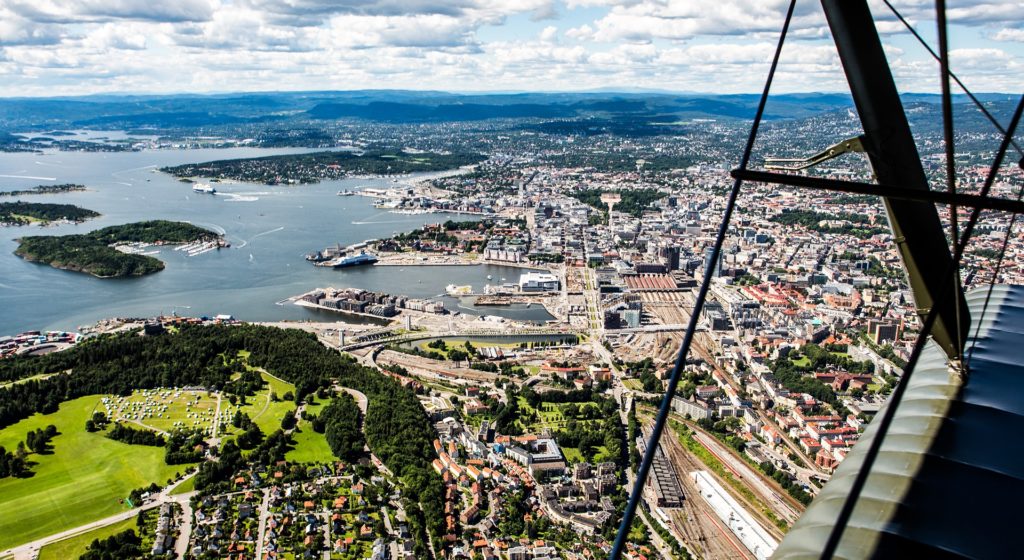 Hundreds of cities in this world like to boast about their application, more or less fortunate, of new technologies. These technologies aid the authorities in bettering their management of public areas, implementing environmental strategies, making improvements to communication and implementing innovative energy solutions. However, in my humble opinion, cities are smart only if the changes they make have a tangible effect on the life and well-being if their inhabitants. As they do in Oslo.

I have noticed that the number of smart city ranking lists has been rising in the recent years. I sincerely hope that this is not merely a fleeting fad but genuine interest in the topic expressed by an ever growing number of organisations, mainly research and consulting institutions, which will translate into real action. In this context, it is important that we get to grips with what the nature or the DNA of an intelligent city actually is. The presence of Norway’s capital city at the top of various rankings is not a surprise. At present, it is ranked number one in EasyPark’s Smart Cities Index 2019, which I already mentioned >> here when discussing Zurich, and number three in the IMD Smart City Index 2019 presented by the IMD Competitiveness Center together with the Singapore University of Technology and Design. Why have I decided to take a closer look at this specific report? I was intrigued by the fact that its main indicator were the residents’ impressions of 5 key areas: health and safety, mobility, activities (leisure, rest, cultural activities), opportunities, and governance. It can be downloaded from >> .

MOVING ABOUT THE CITY… ECOLOGICALLY

Looking at the panorama of this Scandinavian capital city I cannot help but have the impression that despite the high-rise buildings, the port and urban architecture, it does try to fit in with nature. Surrounded by the amazing fjord and lush greenery, does Oslo really know how to go hand in hand with Mother Earth? Well, it certainly demonstrates that ecology is one of the priorities of the authorities, and the residents do not need convincing to take care of the environment. Nobody balks at extensions of the pedestrian zones in the city centre, restrictions on access for diesel-fuelled vehicles on days with poorer air quality, or increasing the fees for entering restricted access areas. It might be just because one can change onto convenient public transport which works perfectly, is well designed, and changes are not troublesome. You can get to the city centre in no time at all from the airport, using an express train which starts directly at the airport terminal, and payment for the journey is made by swiping your card at the platform access gate.

Two wheels are a good alternative too, as the cycle path network (200 km at present, with 530 km being planned in total for the years 2015-2025) and the bike rental network are continuously expanded so as to meet the needs of residents on the one hand and encourage them to actively use this means of communication on the other. Despite a harsher northern climate, many Oslo’s residents choose to travel by bike every day, city bike included. Wow! This form of transport is especially encouraged with students, who can rent a bike for a nominal charge and participate in a number of cycling events. Good for them 😉

For persons who, nevertheless, prefer to use their own bikes but are afraid to leave them unattended, there are bicycle hotels being built. The first one was set up at the Oslo S train station, where one can easily leave their two-wheeler and change onto a train to a home located in the suburbs. More bike storages are planned to be built next to metro stations and other important transport hubs, both in the city centre and on the outskirts of the city.

While their cycling paths are laid out to form a well-knit net, the Norwegians are taking it one step further by developing the idea of cargo bikes – i.e. using the bicycle to transport children and do small deliveries. Great, isn’t it? The colours and creativity of transport bikes will surprise you! 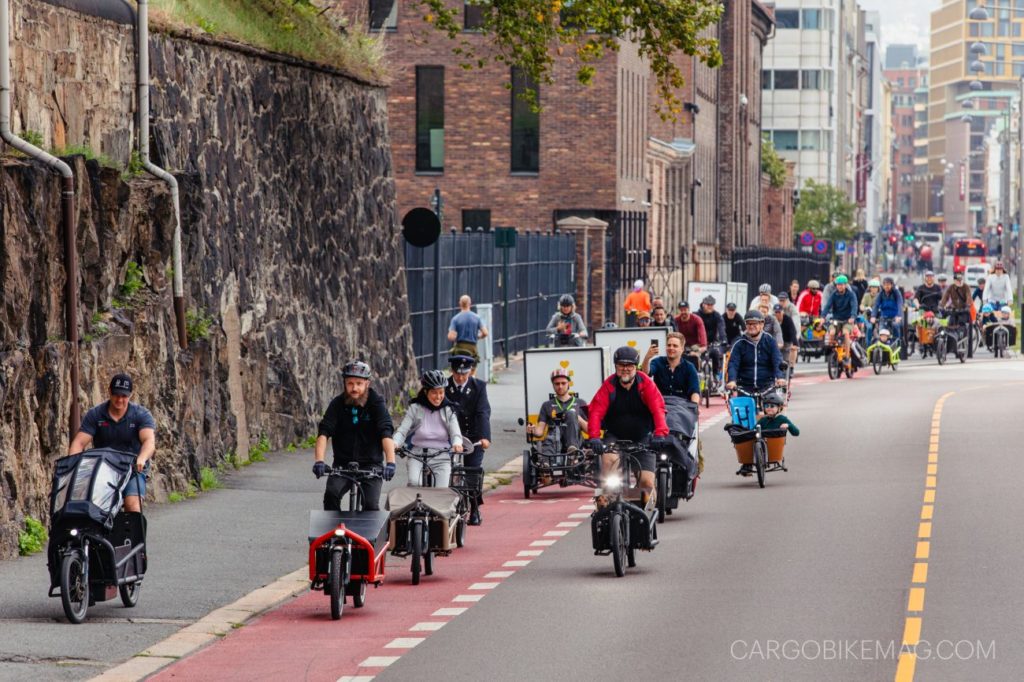 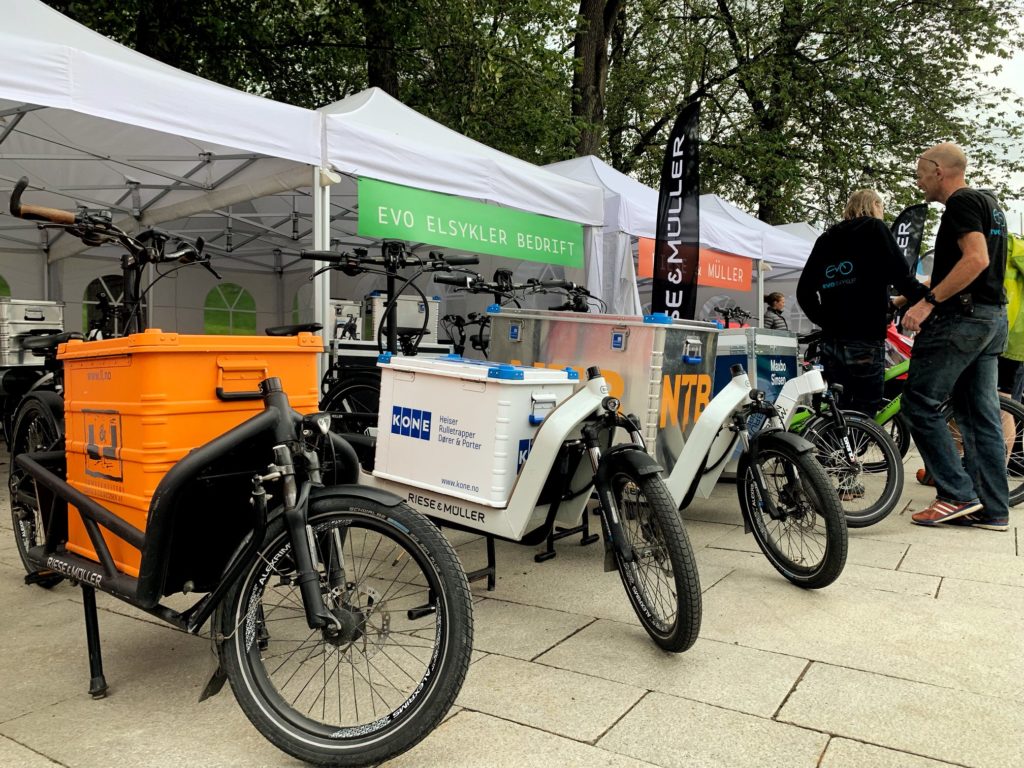 When in Oslo, you will see for yourself the number of electric vehicles on the streets (those with traffic allowed, naturally). Thousands of such cars are rented under a car sharing scheme, and parking spots with chargers are encountered nearly everywhere. This comes as no surprise, really, because Oslo is developing its EV charging station network at a record pace, unmatched by any other metropolis. In 2019, the pool of ca 1,400 municipal charging stations was expanded by further 270, and the authorities declare that even more will be installed in the year 2020. They certainly set an example to follow! But what about the residents of less central and suburban neighbourhoods? There is public funding channelled for putting up charging stations within housing societies and residential communities (construction of over 25,000 such stations has been subsidised already), of which some extend their projects by PV installations. Why the rush? This is an absolute necessity because Norway came second in the world (surpassed by China only) in terms of the number of electric vehicles purchased in the year 2019, for the second time in a row. Over 60 per cent of all new vehicles purchased in that country are electric ones (ev-sales.blogspot.com).

Thus, the residents of Oslo are getting ready for zero-emission car traffic and a total ban on the use of combustion engines announced for the year 2025. But are they driven by affection for EVs, only? Norwegians’ choices have been aided by VAT and sales tax exemptions for nearly a decade. As a result, the electric versions of B & C segment cars could in fact be cheaper to buy than their petrol-fired counterparts. It is true that there will be fees put in place for zero-emission cars entering the city centre and using the charging stations in the year 2020, but the rates will still be nominal. The availability of parking spots equipped with chargers can be checked via a dedicated app.

How does Oslo know which way to go with its development? The city authorities, in their desire to manage the city wisely and effectively meet the climate, economic and social targets, have become devout analysts of bicycle, pedestrian and car traffic density data, charging stations data, not to mention the standard air quality monitoring data. The city ran a Climate Dashboard pilot scheme by which it also tried to create better awareness and motivate residents to use the shared resources responsibly. The analysis of data displayed in real time – overlaid with historic and weather data – makes it possible to comprehend the seriousness of the environmental challenge posed by increasing pollution levels and climate warming in the world. There are also various competitions and initiatives which integrate the scientific community with business to create innovative tools which apply new technologies. Oslo’s residents can use a number of apps to enjoy the intelligent city – from locating the nearest EV charging station to generating the safest route home from school for their children.

Social engagement in joint efforts for climate protection is achieved through numerous schemes, events and consultation meetings. They are used to discuss the local zoning plans, creation of new public spaces, modernisation of individual buildings, and redesigning entire estates. They all prove that residents need places which are conducive to inter-generational social integration, ideally green and modern. In the years 2017-18, there were 1,050 parking spaces liquidated in order to reclaim that space for pedestrians and cyclists. The city’s public utility buildings have very appealing architecture. The award-winning building of the Oslo Opera House, together with the adjacent fjord water pool is one of Oslo’s landmarks. The Stovner Tower – an attraction which combines an observation tower and a walking trail is paced to and fro by residents and tourists alike. The Astrup Fearnley Museum of Modern Art and the Deichman Bjørvika library, which is currently under construction, are stand-out features at the port. The imposing building of the Munch Museum will open soon, too.

Oslo’s city hall, being a very active developer, has undertaken to restrict the negative impact of construction works on the environment. City hall officials performed tests according to which construction plant and machinery was found to generate 30 per cent of air pollution, so they got into a dialogue with the suppliers and subcontractors to lower exhaust emissions on construction sites. Finally, the parties agreed on an even higher standard than originally expected. There are four kindergartens and two sports arenas being built according to the new guidelines, and in practice the diesel plant and machinery has been to a large extent replaced with electric equipment. I am very much in awe – they have raised the bar for themselves really high! More information is available here.

The “No Dig Challenge” – is yet another project that fits in the smart city philosophy, intended to improve the process of constructing and modernising water & sewage networks. Here, the application of new technologies results in a considerable shortening of the duration of works and street closures in the city. It also reduces noise and dust emissions. The tests of trenchless (no-dig) connections to the mains by drilling were successful. The implementation of this method will allow the city of Oslo to save 40 per cent on the cost of this type of investment. Fingers crossed!

Meaning “think greener” – is the unwavering encouragement by the authorities of Oslo, which in the year 2019 celebrated and prided itself on winning the title of European Green Capital 2019. The city received this award not only because its green areas, including the municipal Marka forest, make up almost 70 per cent of the city’s acreage. And not merely owing to the estimates that every resident has fewer than 300 m to go to reach the nearest park. The deciding factor was the sum of all measures for the natural environment. They start at the level of individual households, in which waste is segregated in an uncomplicated way and is effective, because the residents are motivated e.g. with the information that their waste is supplied to a biogas station with the annual capacity of 50 thousand tonnes. The biogas produced at that station powers ca 150 buses and provides compost to ca 100 of medium-sized farms. They end where? I am under the impression that the number of exemplary solutions implemented in Oslo is infinite.

Watch the video below to find out how these solutions work in the ordinary lives of Oslo’s residents:

Let me know what fascinates you most about this green city!