7 facts about Tokyo that you need to know

Tokyo is a place which amazes at every step. In October 2017 I had the pleasure of testing it on my own skin. Together with a group of friends we travelled the length and breadth of this place. Undoubtedly, I drew many inspirations. Hans Christian Andersen said that travelling is living. And that is what I hold on to!

1. Streets and parks in Tokyo are perfectly clean. How is it possible?

The answer is simpler than it may seem. It all begins with culture. In Japan children are taught from an early age the culture of cleanliness, aesthetics, and discipline. Everyone regardless of age collects their own waste to segregate it later at home. Being a guest at a party, it is a good practice to take with yourself empty bottles and packages. Interesting is also the way in which elderly people refer to cleanliness. They want to be active citizens of their country, that is why they work for municipal services and keep everything around them in perfect order. It shows the way in which people can operate in accordance with nature – they only care about the order around them.

Urban culture is here at the highest level.

And how does it look in our country?

In Poland urban culture is definitely less respected than in Japan. I cannot imagine the situation in which garbage cans disappear in Poland – currently, their number is not even sufficient. Unfortunately, messy nature and the lack of perspective thinking about the future of our planet are alarming, and they may have catastrophic consequences. Segregation, recycling and renovation of objects and items are still an increasing tendency in Europe. Polish people should also be ready for this trend. Not out of obligation, but out of their own will. Undoubtedly, the success of second-hand shops (resulting from poverty among the population rather than the concern for the future of the planet or trends), flea markets and local garage sales is pleasing. I place hope in education of children and young people at school as well as at home. It is where the awareness of new citizens in the area of responsibility for the future of the planet is raised. In addition, there are also aesthetic and hygienic aspects as well as tidiness around us, including respect for common and public goods as well as the ones of third parties. It is really hard to find in Tokyo the examples of vandalism which are so characteristic of Polish streets – destroyed benches, ugly graffiti, and broken windows. It is also hard to lose something – in the group with which I visited Japan everyone lost something – a camera, a video camera in a restaurant and a backpack at the station… The owner just had to return to the place, and a lost object always waited for them.

2. Single layered windows and the lack of CO heating system (based on coal/gas fired power plants) as a response to tectonic movements.

Such solutions are forced by Japan’s geo-tectonic situation. Due to constant motion of plates and the risk of cracks, in Japan there is a number of applications aiming at prevention of potential consequences of earthquakes. These are among others:

What are the results?

Described solutions affect the residents’ lack of thermal protection and their huge discomfort resulting from exorbitant energy bills. The problem is much broader, because it generates also gigantic energy demand of the city itself. Japan is one of the biggest producers of nuclear power in the world. More than 40% of electric energy is generated in such a way. Examples of massive tsunamis and earthquakes from the past, during which nuclear power plants had to be shut down, are alarming. Paradoxically, there is a big group of stakeholders who rub their hands with glee when the force of nature approaches. I am talking about road and construction companies which are responsible for damage repair in public areas. On the one hand, it results in a construction boom, on the other hand, it increases Japan’s public and foreign debt which is the biggest in the world and exceeds 50% of GDP.

Another consequence of the lack of energetic stability is the large outflow of production abroad. Problems with guaranteed continuity of electricity supply are scary. Many producers, mainly the ones from automotive industry, shifted a large part of their production abroad, largely to North America. Machine recalibration and restoration of production rhythm last for weeks, which causes massive delays in supplies and enormous losses. During my last visit in Tokyo I almost couldn’t find any traces of renewable energy, even on modern, artificial Odaiba island. Maybe this is a chance to find a solution to Tokyo’s problems?

During my stay in Tokyo I experienced an earthquake with a magnitude of 3.4 degree on the Richter scale. It is a feeling similar to the one experienced on a bridge crossed by a tram. Vibrations were unnoticeable, that is why none of my comrades paid attention to them. Only an application installed on my phone, which notifies of earthquakes, noticed this.

3. At Shinjuku Station, the biggest one in Tokyo, one can meet 3,5 million of people daily.

This is the most frequently used metro station in the world, entered into the Guinness World Records. Daily number of users exceeds two times the number of residents of Warsaw. Metro is another signature of every Smart City after skyscrapers (I wrote about it here). Organisation of transport for such great population is impressive – perfectly described stations, very high frequency of departures, absolute tidiness, virtual lack of any smells characteristic of such underground objects and millions of people commuting in silence. It is prohibited to talk loudly in compartments, which is, unfortunately, the domain of each metro in Europe. However, I was impressed the most by monorail connecting Tokyo with artificial Odaiba island. Monorail transport flashes through the city on a special flyover at the height of 10 metres, from which the perspective looks completely different than from the level of pedestrian traffic. 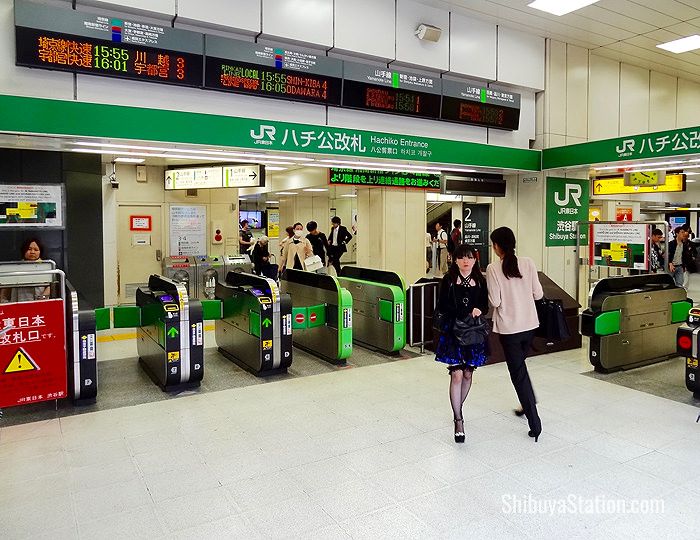 4. Next to Shinjuku station there is the largest pedestrian scramble in the world.

The movement on the intersection is a three-way one – crossing it takes place to the left, to the right and through the centre. Frequency of use is 100 000 people per hour, which means that almost all residents of Zielona Góra would cross the intersection within an hour (!). This communication solution is very impressive, especially when one watches it from the second floor of Starbucks café located in one of neighbouring buildings. The impression is further increased by rainy weather, when transparent umbrellas popular among Japanese people appear above the heads of passers-by. Of course, one can buy them in a street dispenser. Due to their low price, they are treated rather as disposable ones.

It is a standard equipment in every toilet in public facilities, restaurants, metro, cinemas, hotels, shopping malls, office buildings and majority of houses in Tokyo. This is where we return to children’s education in the area of hygiene.

These are not only masks covering the mouth, which must be worn by all ill people on the streets, in offices and in the shops, but also washlets which ensure extreme hygiene and tidiness in the toilets. Our washing facilities, especially public ones, but also the ones in the majority of restaurants, clubs, or shopping malls, are scary places which do not have anything in common with order and nice smell. Washlet ensures tidiness at the highest level. What I find interesting is the reason for absolute monopoly of one American producer, TOTO company, on this market. The offer of such solutions by, among others, Duravit company, called Sensowash, has already appeared in Poland. For now, it is dedicated rather to the wealthier part of the society, due to their prices, which begin from PLN 5000 for the simplest model. The prices of TOTO washlets begin from USD 800, that is PLN 3000. Even this price is too high in Poland, and rather the market value of tidiness and hygiene of the Polish society. I have installed such Washlet at home. I must say, that it is not only a heated and illuminated toilet desk for a sleepy person who enters the bathroom in the night, but also various types of water streams and directions of washing our bottom with the possibility of regulation of the temperature of air and water. The process ends with drying, which causes savings in toilet paper consumption. I highly recommend it. I can see a large market in Poland for a producer who will create a relatively cheap mass product.

Vending machines are also common in Poland. The difference is that they offer a limited range of products. Additionally, these are usually highly processed food products. In Japan I encountered machines serving hot hamburgers, rice, pancakes, fresh lettuce, bananas, and eggs. There are also t-shirts, umbrellas, lightbulbs, comic books and batteries. This is also a good example of a smart solution connected with saving time. People should be more productive to, among others, save time devoted to some activities. When I want to buy a simple t-shirt, because I forgot to take it to a fitness class, I do not have to go to a shopping mall and waste an hour, I will simply buy it from a machine in the street. The same concerns healthy snacks available only in the shops. In large cities, in the streets full of office buildings there is no space for fruit stalls or shops in which one can quickly buy a lacking battery for a camera. Machines help also quickly develop photos or exchange a currency. I can see a future for the development of this market in Poland.

An incredible element of street design are restaurant windows with exhibited prepared meals and their prices. As a result, tourists choose a dish by its appearance and price, and then enter the restaurant, ordering the thing shown in the window, which is the same, but fresh.

The problem is that the dishes exhibited in the windows are made of silicone and other solid synthetic resins, and then painted. They look just like real ones – they are unrecognizable! Food replicas were used in Tokyo as early as many years ago, but the base material was wax.

It is an excellent idea to advertise dishes in the windows of Polish restaurants in such a way, but I am afraid that such dummies are very expensive. Only in Tokyo there were so many of them, that the prices fell to such level, that it was more economical to buy a dummy than exhibit fresh meals every day, which can frequently be seen on the Polish streets and next to cash registers in Polish bars.

Japan is a beautiful testimony of the humankind. It is an unpleasant experience to see Japanese people constantly looking at the monitors of their smartphones. As we know from the example of Black Mirror series, it is hard to look into the future without fears which are created before our very eyes.