Currently, autonomous vehicles are being developed by technological giants like: Google, Tesla, Apple, Uber and many car companies. These are, for example, Mercedes, BMW, Volkswagen/Audi, Ford, Volvo, General Motors and Toyota and the Renault-Nissan-Mitsubishi group. I recommend reading the article where I elaborate on the subject of self-driving cars.

Many cars which are sold by car dealers have some degree of autonomy – for example parking assistant. The latest models of E class Mercedes, which are adapted to city driving, or Audi A8, which can drive autonomously on a motorway, are regarded as highly automated. Such car is able to recognise the limits of its capabilities and non-standard behaviour of other drivers; however, it is the driver who must take control over the car at relevant times. 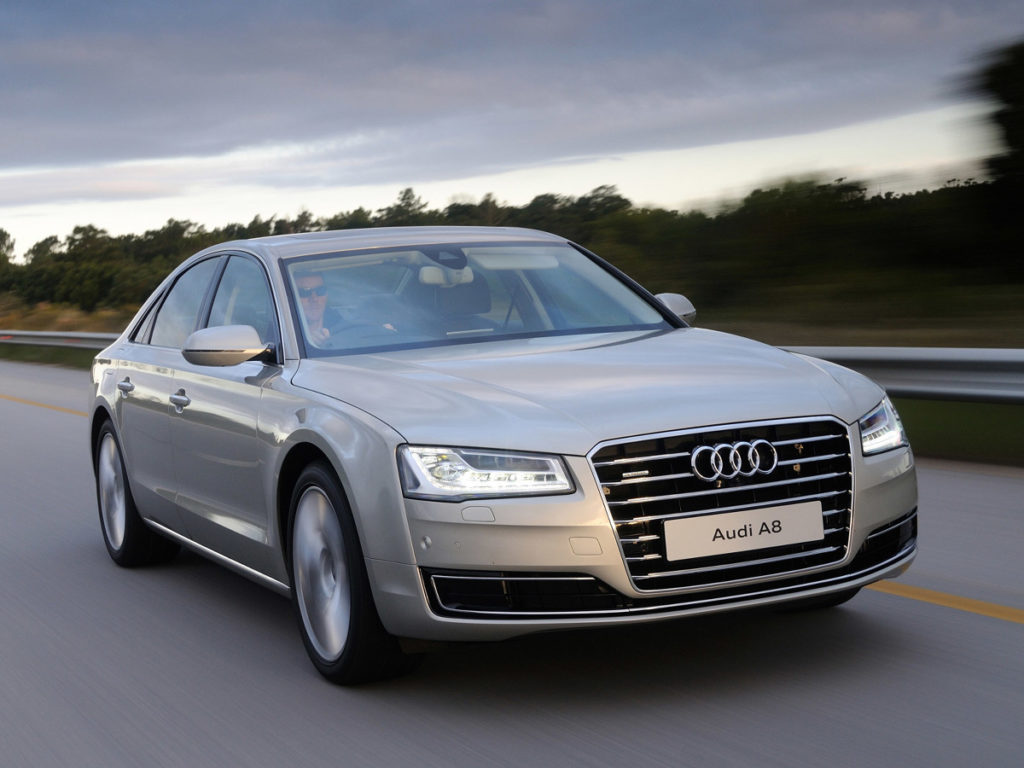 In the case of a fully autonomous car, it is guided exclusively by the system. There is no steering wheel, and the user only enters the destination. A good example is Waymo Firefly developed by Google – a city car without gear lever or pedals. Another vehicle of this type is Volvo XC90 which is adapted for Uber. Unfortunately, fully automated cars are not in series production yet. 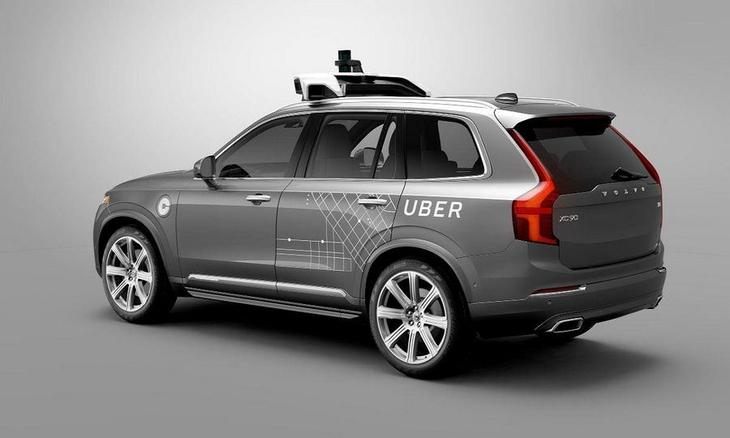 Self-driving cars use many sensors to perceive their surroundings. Satellite navigation system allows very high precision – it is not only GPS but also satellites of GLONASS, Galileo and BeiDou systems as well as a system for increasing accuracy of geolocation which is based on corrections received from reference networks of NTRIP stations. LIDAR is a set of laser devices scanning the environment. A system of high-resolution cameras works both in visible light and infrared radiation. Ultrasound sensors work similarly like the echolocation system of bats: they detect posts, kerbs, chains or pedestrians moving in close vicinity. These cars process data and have an in-built decision-making system – artificial intelligence and machine learning algorithms.

The idea of autonomous vehicles was even mentioned by Leonardo da Vinci. The first real vehicle without a driver was developed in the 20’s in the United States. It was a car where driver was substituted by a remote control system. It was controlled by a car which was driving just behind that vehicle. It was quite a big event at that time. Journalists from the Milwaukee Sentinel wrote about a “phantom auto” on the streets.

In 1939, the General Motors company organised the Futurama exhibition in New York. It presented the vision how world was going to change until the year 1960. The concept envisaged separation of car traffic from the environment. It also assumed a collision-free traffic and “driverless” cars moving on specially-adapted motorways. 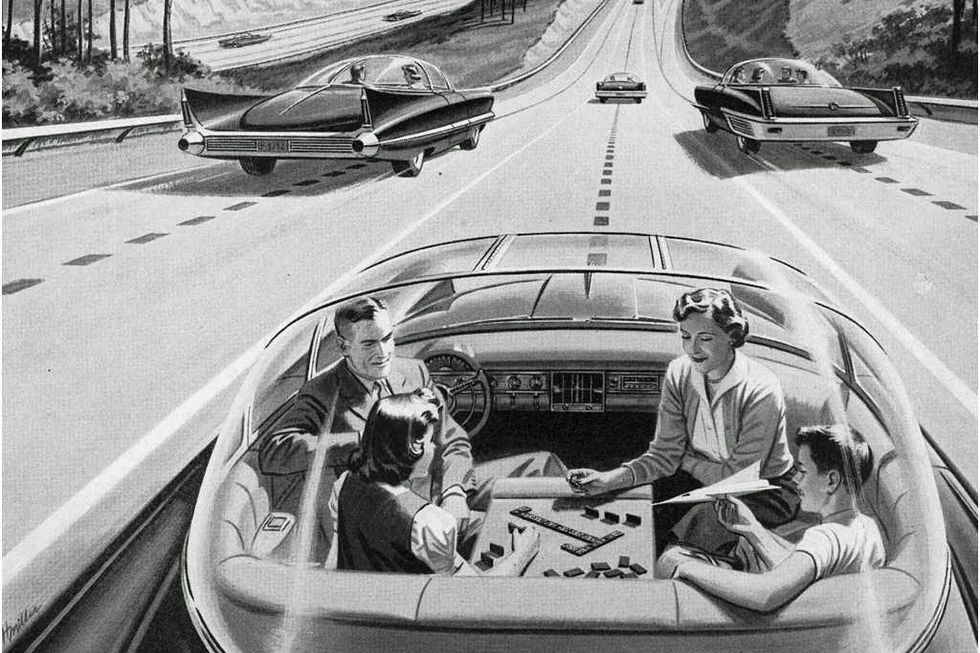 In 1953 the company RCA Labs conducted trials with a miniature model which moved autonomously thanks to magnetic bands installed into the road. In 1958, the same group of people carried out a trial with a normal size car on a specially prepared section of public road in Nebraska. Cooperation with General Motors allowed a more advanced solution – a road which detected vehicles which move on it. Thanks to the information, an autonomous vehicle could accelerate, brake or even turn. Similar experiments were conducted with the use of Citroen DS in the 60’s and 70’s in the UK. The control was made possible by signal cables placed in the road. Such innovative ideas were focused on the infrastructure – cars could move autonomously only in specially prepared places. This would require building all roads anew.

At the beginning of the 80’s. Ernst Dickmanns, computer image processing expert from Munich, began trials with a completely autonomous vehicle based on a 5-tonne Mercedes van. The designer equipped the vehicle with several cameras and a computer, and developed an innovative algorithm which simulated the so-called saccades of the human eye. This allowed the computer to “see” in three dimensions. A vehicle named VaMoRs rode only on road sections without traffic in order not to breach the applicable law.

Not much later a programmed named PROMETHEUS (PROgraMme for a European Traffic of Highest Efficiency and Unprecedented Safety) was started. It resulted, among other things, in construction of VaMP, that is a converted Mercedes 500 SEL. It could independently track other traffic participants, change lanes and overtake slower vehicles. Its control computer could control even several vehicles at once. In 1992, trials of autonomous vehicles were conducted in normal road traffic. 3 years later, an autonomous vehicle covered 1700 km – from Munich to Odense in Denmark. However, a human had to intervene from time to time. The longest section with no driver’s reaction was 158 kilometres.

Also, DARPA carried out works aimed at developing autonomous vehicles. The Autonomous Land Vehicle (ALV) could move in difficult, unknown terrain with numerous obstacles. The ARGO programme was carried out in Italy at the same time. A converted Lancia Thema based its functioning on tracking horizontal marks which were painted on the roads. It was a quite effective solution. Over the distance of 1900 km the vehicle could travel autonomously on 94% of the distance.

Shortly after that, the entire world received an uninterrupted GPS signal, and public access to satellite navigation opened a new chapter in the history of autonomous vehicles. In the relatively recent past, the topic attracted interest of mostly technological companies and universities. Now, it is estimated that around the year 2030 the market of autonomous vehicles will be worth about 10 billion dollars.

One of the benefits of autonomous transport could be increased mobility of disabled persons. It would be a great facilitation for the blind or for people with mental disorders. Autonomous vehicles could apply technological solutions which are more advanced than human senses. Importantly, robots act according to rational algorithms and are not driven by emotions. They do not deliberately break traffic regulations.

Currently, autonomous vehicles are not only a means of transport but also a tourist attraction. In Neuhausen am Rheinfall, a Swiss town, such vehicle runs on a regular transport lime on normal roads.

We can say that these vehicles are a solution to the problem of shortage of parking spaces – they will just stop for a moment while waiting for the next user. If the weather is bad, and the closest bus stop is far from the place where we live, we often decide to use our private car. But if an autonomous vehicle could arrive just in front of our door, that would not be a problem anymore.

One of organisational dilemmas connected with autonomous transport is the question of liability for road accidents. It is programmers or persons managing their work who could be the subject of criminal prosecution. The driving system requires appropriate security measures. However, it will be very difficult to verify whether a given person had undertaken due diligence or not. A machine cannot be blamed for an accident – mistakes are made by human beings. It will be big challenge for programmers. When concerning conditionally automated vehicles, reaction time of the driver who takes control in dangerous situations will be of high importance.

In march 2018, for the first time in history a fatal accident involving an autonomous vehicle took place. An autonomous Uber vehicle was involved in a crash that killed a 49-year-old woman. The vehicle was travelling 60 kilometres per hour and did not brake before the place of collision. An Uber employee had no time to react. The woman was emerging from shadow, and probably that was the reason why sensors did not react.

Researchers from the World Economic Forum had analysed city traffic in Boston and concluded that, apart from the city centre, such cars should perform well. However, they could lead to more traffic jams in the heart of the city. People would abandon public transport, and this means more cars on the streets. City authorities will face a significant challenge – how to convince inhabitants that buses and trams are still a good choice?

In 2016 BMW announced that such vehicles would be marketed in 2021. However, the European Transport Commissioner, Violeta Bulc concluded that she expected mixing of autonomous vehicles with traditional ones somewhere around the year 2030. These cars will have the option of taking control over them. Completely autonomous vehicles are expected between 2040 and 2045. 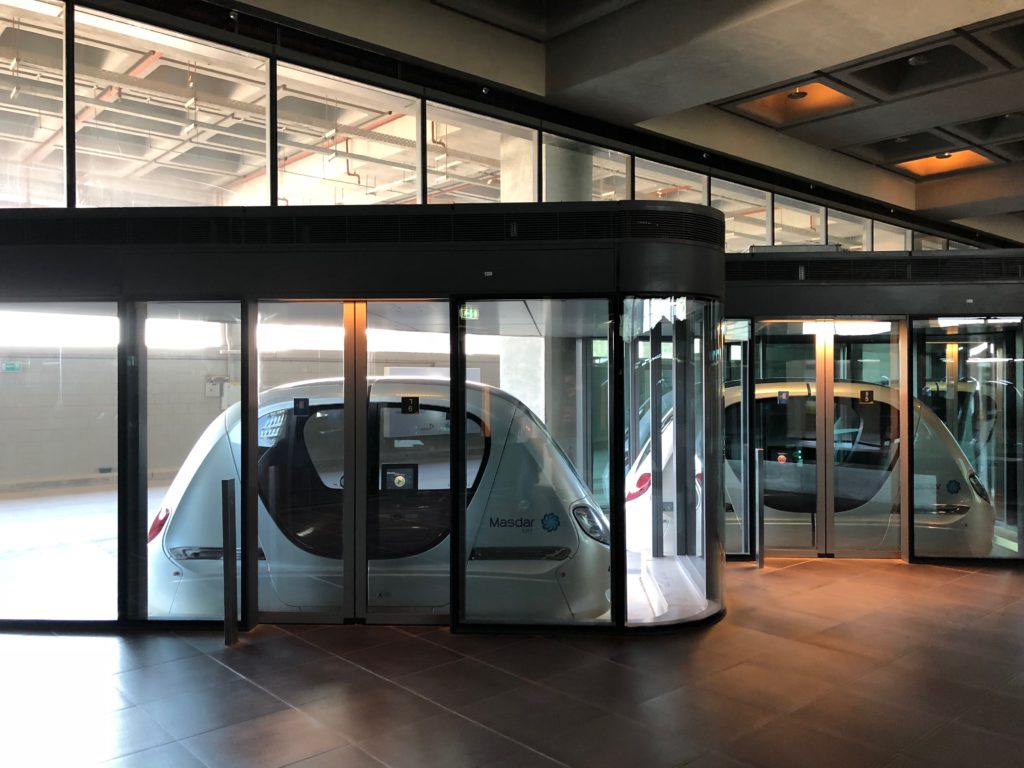 The above photos show driverless vehicles which are tested in the city of Masdar in the United Arab Emirates. Even today, it is possible to travel in such vehicle in some parts of the city. The car can accommodate 4 adults and 2 children and is capable of a speed of 40 km/h. I recommend reading my article on smart solutions in Masdar City.

What is your opinion on such means of transport? I am curious when they will appear on Polish roads. I will appreciate your comments.