Drought or flood. 5 wise solutions for water management in the city

Both excess and lack of water can have disastrous effects. Water is the natural element without which there is no life, but it can also destroy that life.  Climate change is becoming more and more acute and even in temperate zones we observe extreme weather phenomena such as floods, storms, whirlwinds, downpours or, on the contrary, prolonged drought and desertification.  Are we about to run out of drinking water?

Traffic jams, congestion, rubbish, lack of bicycle paths, poor transport or lack of greenery, and consequently – poor quality of life and air in cities can be quite easily diagnosed. Regulating these issues often comes to the fore in the objectives of sustainable cities, but the strive to achieve “smart water” should be equally important. Smart systems managing water and sewage networks in smart cities allow to prevent water loss. Modern treatment plants are becoming more and more efficient, however, only a combination of many activities will help us protect ourselves from drought or unexpected flooding.

Indeed, the return on investment in reasonable water management, not only in financial terms, is not as spectacular as the construction of kilometres of roads or parks. Establishing a balanced position for water issues in the city is therefore quite a challenge and requires a comprehensive approach.  Let us consider what steps should be taken.

For most inhabitants of cities in developed countries, access to drinking water is something obvious. We turn the tap and have plenty of clean, running water, which we drink, use for cooking, washing, cleaning and watering the garden. This is due to the water supply infrastructure that has been developed for decades, however, easy access does not entitle us to waste this life-giving fluid. After all, it does not come from nowhere. No matter where you are – supplying drinking water is an expensive and complex process. Many municipal units are involved in water intake, treatment, quality testing, pumping, construction and maintenance of the network, and later on the sewerage and treatment. In addition, more and more areas, including Poland, are struggling with a growing water deficit, so its use should be limited. This can be done in many ways and city authorities educate residents to respect water, but sometimes they have to go as far as to ban watering the garden or washing cars.

“Clean water and sanitary conditions” is one of the objectives adopted in the Agenda for Sustainable Development 2030.

How to save water at home?

The UN reports that more than 80% of untreated man-made wastewater ends up in rivers or the sea. Fortunately, this is unthinkable in many countries where newer and more efficient wastewater treatment plants are constructed. Wastewater management and appropriate sewage systems play an important role in ensuring proper sanitation conditions and preventing the contamination of the local environment and thus preventing the contamination of drinking water resources. Nowadays, in developed countries wastewater is increasingly seen as a valuable resource that can be used to generate: energy, nutrients and water for irrigation, for industrial purposes and even for drinking.

An interesting example is Orange County, California, which has been fighting with drought and fires for years. The world’s largest Ground Water Replenishment System (GWRS) was launched there. Every day, it collects more than 750 million litres of sewage which would have been previously discharged into the Pacific Ocean. It purifies them by means of a three-stage advanced process involving microfiltration, reverse osmosis and ultraviolet light with hydrogen peroxide. Water treated in this way is then pumped into injection wells and percolation pools, where it penetrates deep aquifers in the underground pool. In this way, the local supply of drinking water, which was previously supplied from remote areas, is increased.

What can be done with wastewater at an individual household level? Owners of houses which cannot be connected to the sewage system due to the dispersion of buildings should consider ecological domestic sewage treatment plants. However, this solution is not available to city dwellers. How can you reuse the water used in our kitchen or bathroom? The solution can be the installation of grey water. It is assumed that about 30% of the water we use in households (according to some sources – even 40%) is needed to flush toilets. It could be obtained from the remaining 70% used for washing, bathing, laundry or dish washing, if an additional installation was decided during construction. Unfortunately, this requires space for a settling tank and a water reservoir, which in the case of multi-apartment buildings, where almost every square meter is intended for sale, simply does not pay off… However, are you sure?

It is more optimistic to implement grey water recycling systems in office buildings and even hotels. And this is encouraging because people in these places are not very willing to make efforts and maintain discipline in relation to water saving. Rainwater can also be recovered for flushing toilets, however, this is a more advanced process.

In Poland we are no longer worried about the rainy weather forecast. On the contrary, we are afraid of the next year of drought, which is highly likely after a practically snowless winter. There is a growing awareness that we need to retain as much rainwater as possible in various ways since even after rebuilding the existing rainwater drainage systems, water in cities will still be insufficient, while in case of rapid and heavy rainfall overflow and flooding will occur. Possibly, water will run off too quickly and will not bring the expected benefits. It is very important to limit the discharge of water and manage it where it appears. Owing to the installation of storage tanks, the accumulated rainwater can be used, among others, for watering the lawn or plants in the garden. The use of drinking water treated for such purposes is simply a waste.

The authorities of Katowice are fighting against drought and at the same time against the effects of violent rains by building 13 tanks with the total capacity of 6.5 thousand m3. 6 of them have already started to collect water which is used for watering urban areas and cleaning squares or pavements. The investment is scheduled to be completed in 2022 and it also includes additional 7 km of rainwater drainage.

As far as individual water collection by residents is concerned, there is room for action here too. Not everyone can afford to dig a large capacity container into the ground, but even a small container in the form of a barrel or decorative pot, easily connected to a gutter, is a good step. How to encourage city dwellers to take such actions? 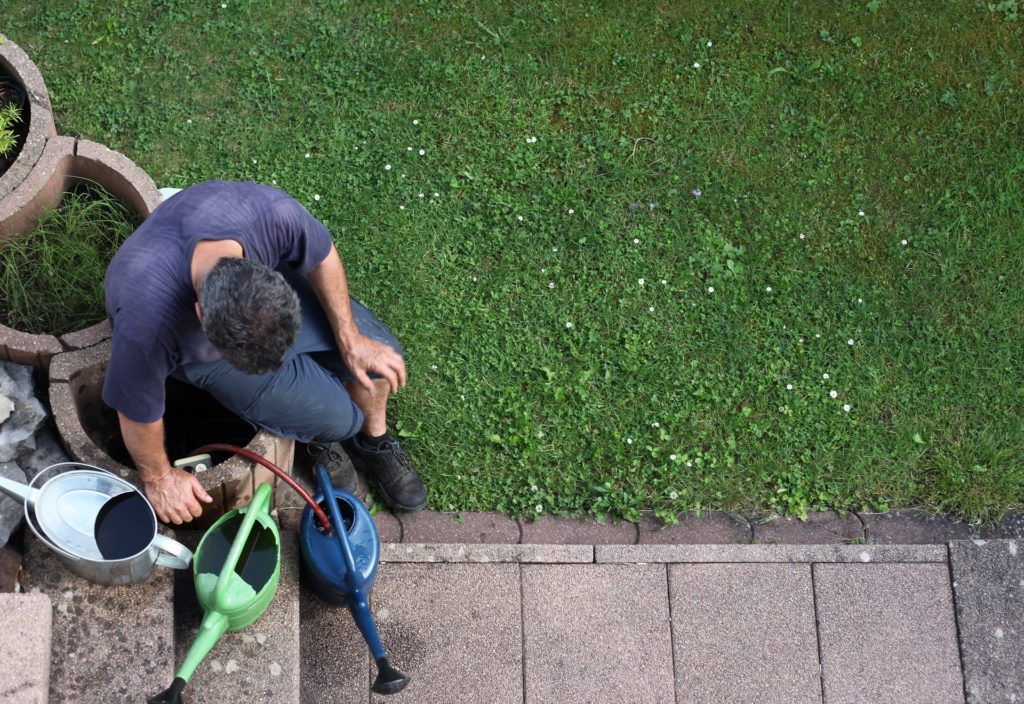 Kraków has once again announced a pool of subsidies for the installation of rainwater collection and use. Kraków’s small rainwater retention programme has been carried out since 2014. Within its framework, 495 such installations have already been completed, by allocating PLN 3,090,000 for this purpose. Currently, a refund of up to 80% of the costs can be obtained – from PLN 5-10 thousand for the installation of underground tanks, but also smaller amounts from PLN 200 to 500 for small tanks collecting rainwater from roofs. On the other hand, a maximum of 12 thousand zlotys may be granted to those who decide to implement the following systems: bioretention, drainage collecting rainwater and snow melt or irrigation of green areas, wooded areas and gardens.

Similar programmes are implemented in other Polish cities: Warsaw, Gdańsk, Wrocław, Bielsko-Biała and Lublin. It is a good direction!

How to engage residents in grassroot initiatives in their cities I have already written about here. 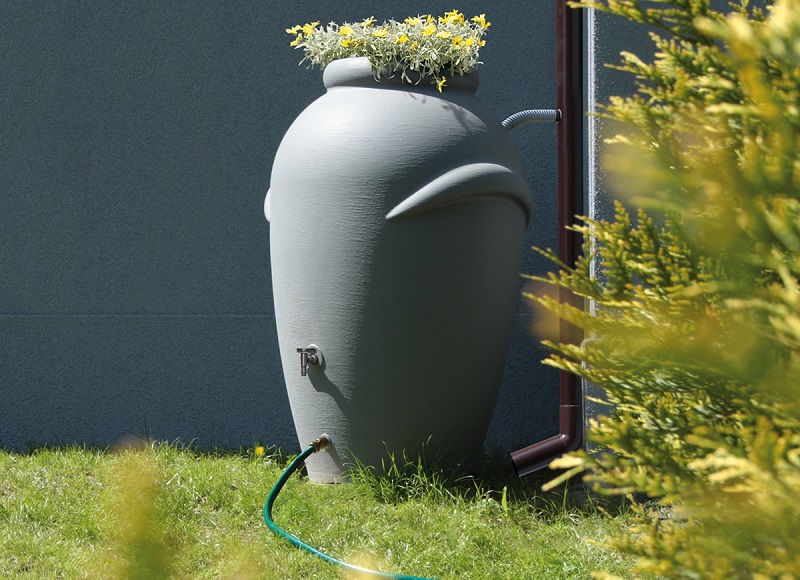 Stopping of rainwater at the place where it falls and its local management is not only the concern of private property owners. It is great that the authorities subsidise the initiatives of residents but they must also make an effort themselves to retain water and reduce the risk of flooding during heavy rainfall. Such phenomena are highly probable in cities with few permeable areas, where streets and squares consist only of asphalt and paving. Chaotic urbanisation and the lack of harmony in the development of urban spaces make the city seal itself and even if the sewerage system is efficient, rapid drainage of rainwater is unreasonable.

This most densely populated city-state fights for drinking water in various ways, so it stopped wasting rainfall. Many urban areas have been rebuilt. Almost every drop of rain is captured by an extensive network of drains (Singapore has about 8,000 km of drains, rivers and canals) or absorbed by green areas. Interestingly, the city has two separate systems: for collecting rainwater and sewage. Once a paved section of the Kallang River has been rehabilitated. It has again become a green area and a sanctuary of the environment. The retention capacity in this section of the valley has been significantly increased, which is important in the context of frequent monsoon rainfall in Singapore. Such a revitalised area not only helps to prevent flooding, but is also an attractive resting place for residents and a habitat for many species of plants and animals.

In Poland, the problem of shaping urban spaces without taking into account the smart management of rainwater is also increasingly discussed. Some cities recognise the need for change. They can rely on the support from the National Fund for Environmental Protection and Water Management which will allocate PLN 10 million for investment implemented by cities to better retain rainwater in cities. It seems that this is not too much in relation to costly road and revitalisation investments in cities, but it is a good thing too.

Maybe, however, new urban planning guidelines are needed to prevent further urban spaces from being concreted, or maybe even to change the building regulations so that private buildings also recover rainwater?

It is rather not necessary to convince anyone that the vegetation in the city is not only an aesthetic aspect, but also fulfilling many necessary functions. Green areas are resting places for residents, they produce oxygen, absorb carbon dioxide, create a shelter for birds and small animals, trees lower temperature by giving shade. However, plants need water too… Maybe they take it away from us because we have to water them in the summer? Greenery needs to be nurtured – that’s true, but if we take a sensible and comprehensive approach to water management in urban areas, the balance will be definitely positive. First of all, green areas have a positive impact on retention phenomena. They are largely responsible for avoiding soil erosion and slowing down surface runoff. By absorbing water and allowing it to penetrate deeper layers, they also prevent the groundwater level from falling.

Moreover, skilful selection of plants to climatic conditions and biodiversity minimize the need to irrigate parks or squares.

A very interesting initiative is the creation of rain gardens which, in addition to all the tasks already mentioned, absorb up to 40% more rainwater than a lawn, preventing flooding. The so-called hydrophytic vegetation used, which particularly likes water, is additionally able to pre-treat it and introduce it into deeper soil layers. 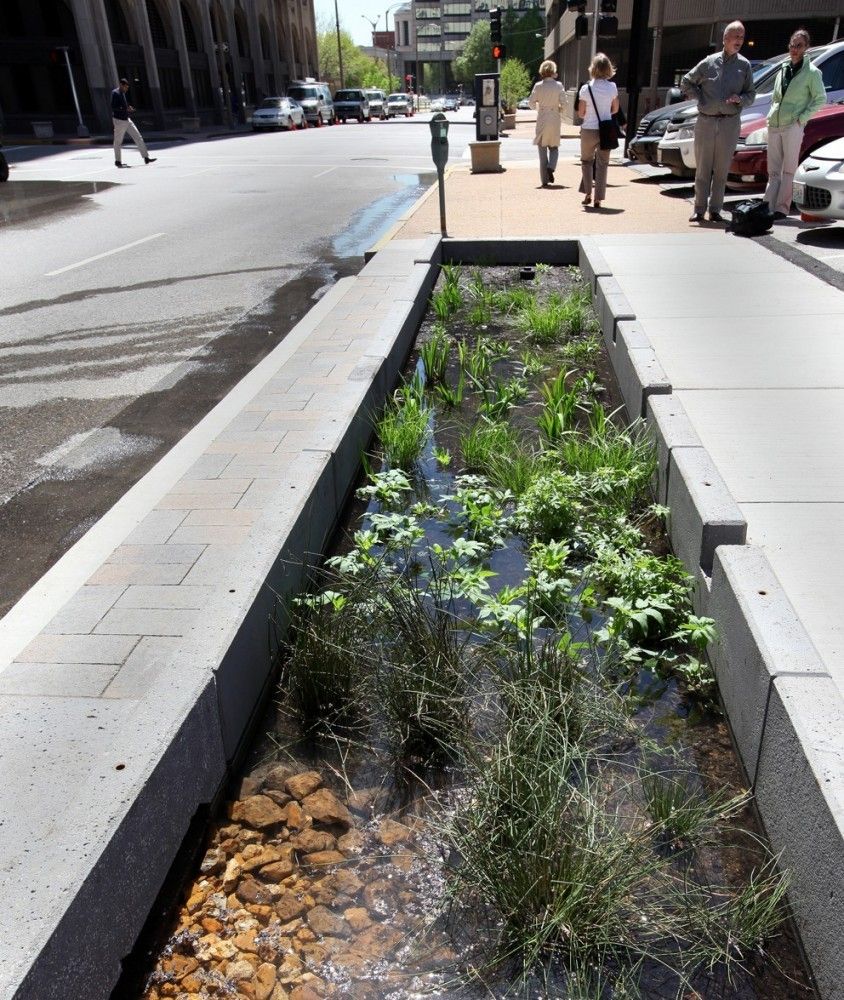 Rain gardens are ideal near sealed areas, from which excess rainfall can be drained away. Several such gardens have been created in Gdańsk where the inhabitants already feel the solution to the problem of flooding some points of the city. It is followed by Olsztyn and Łódź. I hope, these are not the only cities.

Let’s not waste water, let’s retain it, recover it and enjoy its benefits!