Once again, Vienna was ranked first in the Smart City Index ahead of London and St.  Albert. Last year, the capital city of Austria was also the leader, defeating world-leading metropolises such as Chicago and Singapore. What makes Vienna the world leader in the ranking of world smart cities for 2 years?

To begin with, a few facts and interesting facts about Vienna:

The Smart City philosophy means focusing on people rather than on technology and buildings. It is for them to create space fostering the improvement of quality of life, personal development, health, productivity. Vienna copes with these challenges perfectly well. The work on the effects that can be observed today began some 100 years ago, before the idea or slogan “smart city” came to being. The authorities simply consistently implemented the sustainable development policy relying on the needs and opinions of the inhabitants.

This is perfectly illustrated by the analysis of the “level of smart features” of cities carried out at the time by a team of employees of the Vienna University of Technology. After surveying 77 European metropolises with 100,000 to 500,000 inhabitants, they identified 6 key categories that define a “smart city”. They include:

Looking at Vienna, one can certainly say that it is an agglomeration managing perfectly in all these areas. And it does it so well that over the last two years it has been leading the ranking of the smartest cities worldwide!

The latest Smart City Index 2019 report published by Roland Berger reviewed 153 cities worldwide that officially have a smart city strategy. Only 15 of them have plans that demonstrate a comprehensive strategic approach and only 8 are at an advanced stage of their implementation.

The evaluation framework is based on 3 dimensions of a smart city, 21 main criteria and 31 sub-criteria (listed below).

The Austrian capital was ranked first, ahead of London and St.  Albert, due to its integrated strategy and innovative solutions in the areas of mobility, environment, education, health care and public administration as well as a system for monitoring the progress of individual projects. 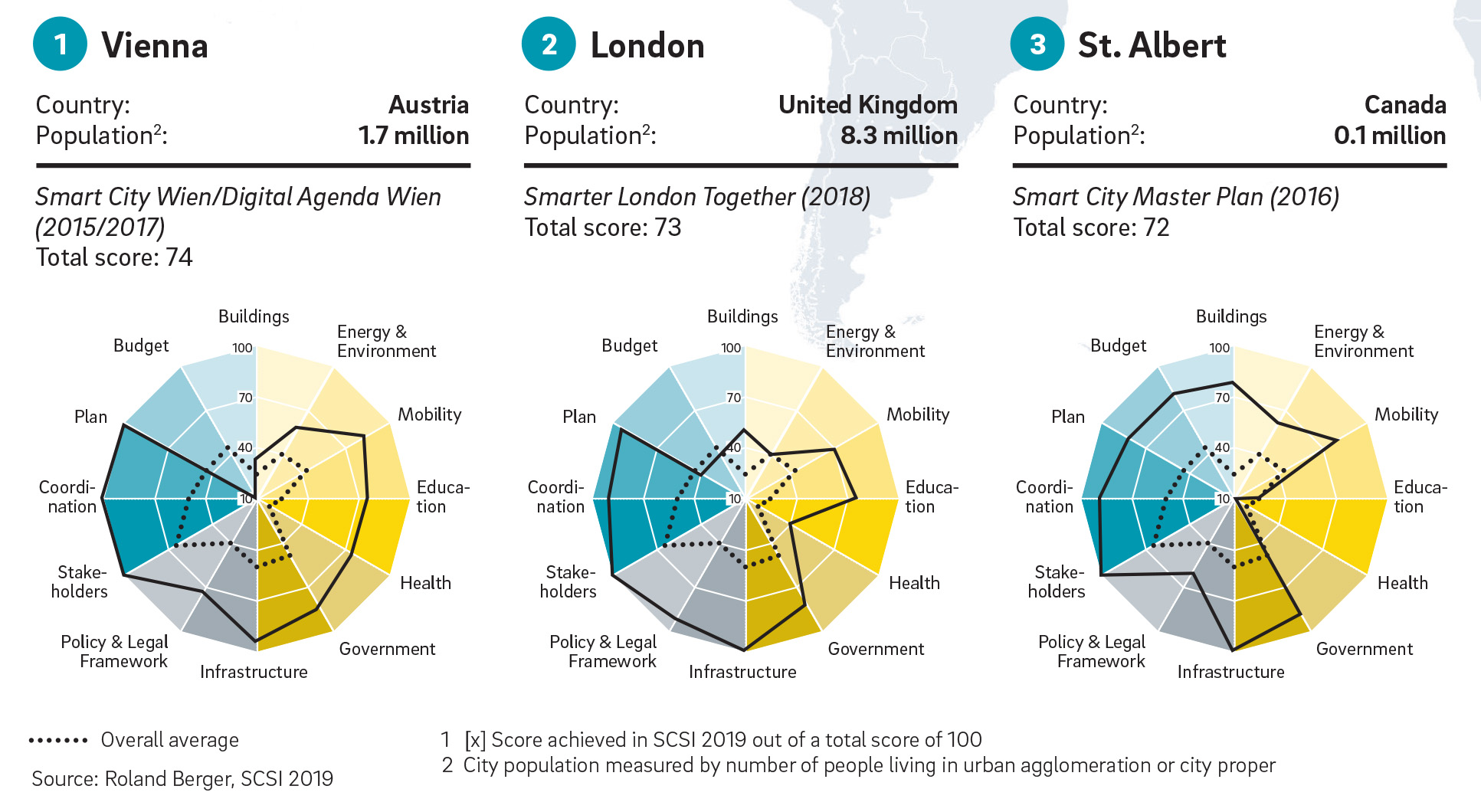 If you would like to read the entire report, you can download it here >> Smart City Strategy Index.

I am pleased that Vienna has once again been awarded. In my opinion, the city fully deserves the title of a leader. Why? Below, 7 reasons are listed why, in my opinion, Vienna is recognised as the best smart city worldwide.

Vienna is ranked first because of the holistic strategy of smart cities in three main categories: quality of life, efficiency of resources and innovation.  The Austrian capital presents the implementation of the strategy with a clear and comprehensive approach. The majority of initiatives related to digital technology are very well adjusted to short, medium and long-term objectives. Moreover, these initiatives effectively stimulate corporate sponsorship and pilot programmes which strengthen the city and the national economy.

Both the government and business leaders claim that success in implementing an integrated strategy is an ideal combination of long-term planning and civic participation. The implementation of smart activities is fostered by the central management – in the case of Vienna it is the Smart City Agency. Engaged experts combine technical expertise with project management, while coordinating the divergent interests of the city, the government as well as service and solution providers.

Like any other city, Vienna also faces challenges. These include the annual population growth at a level of approx. 30,000 people, thousands of migrants and refugees staying in the Austrian capital or efforts to reduce the number of cars per 1000 inhabitants. 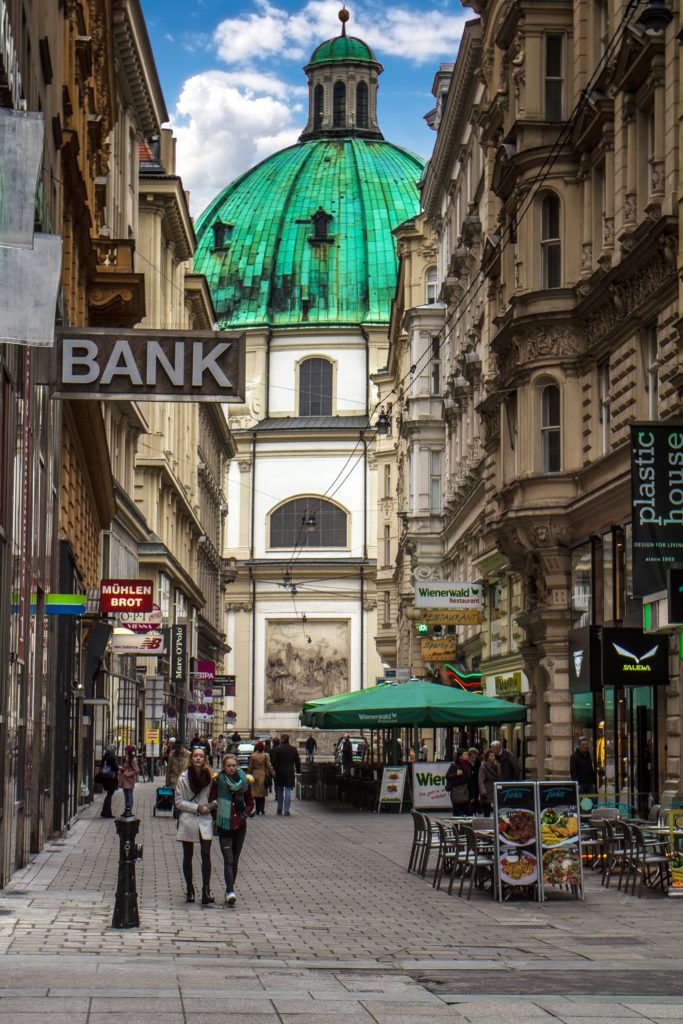 In the Mercer survey carried out in 2019 for the tenth consecutive time whereas in the British weekly “The Economist” in 2018 for the first time, Vienna won the first place in the world’s ranking of cities with the highest quality of life. The Austrian capital is appreciated for its safe urban environment, excellent transport system and socially oriented urban services.

This should be still supplemented by a well-designed public space that promotes healthier lifestyles and well-developed community housing. In Vienna it is believed that housing is the “basic human right”. That is why about half of Viennese people live in government-subsidised housing (in 2015, reserves were established for 7,200 subsidised dwellings for residents). Strict rules concerning rent increases apply. Viennese people only have to pay one quarter of their income, as opposed to London, where tenants have to spend three quarters of their income. Maintenance costs in Vienna are very low compared to New York and London.

What else affects the friendly living conditions in Vienna? Unlimited possibility for inhabitants to use green areas (widely developed recreation), abundance of public spaces fostering integration of many social groups and wide availability of health care.

With a population of almost 2.5 million people in the metropolitan area, Vienna is the largest city in Austria. The Austrian metro system transports 1.3 million passengers every day and, according to the International Public Transport Association, is the best public transport system worldwide.

How did it happen that so many people use public transport? This has been achieved through a combination of policies aimed at integrating urban and transport planning as well as shifting traffic to environmentally friendly modes of transport. The city has taken a number of measures to improve sustainable transport, such as developing public transport infrastructure, improving the quality and image of public transport, introducing strict measures to manage parking spaces for commuters and improving conditions for pedestrians and cyclists.

At this point, the pilot project “Schulstraße” is worth mentioning  which was widely commented last year and which introduced a ban on transporting children to one of Vienna’s schools. What was its effect? After 3 months of the project, both parents and local authorities supported the project continuation and 20 more schools declared their willingness to close the school streets. As a result of the pilot project, they have been transformed into a sustainable solution to be successively implemented in consecutive parts of Vienna (there are about 300 primary schools across the city).

Interestingly, inquiries concerning this project have already been received by the Mobility Agency in Vienna from other cities, such as Kraków, Berlin and Montreal.

The main objective of the project was not only the safety of children but also the introduction of new transport customs – first of all the promotion of pedestrian traffic and the improvement of pedestrian safety. According to Vienna’s plans, in 2030, 85% of the routes were covered by walking, cycling or public transport.

In 2015, a strategy on electromobility development was adopted with the aim of reducing the role of cars to the minimum possible, including electric cars. As Dieter Hӓusler from the Vienna mobility strategy section emphasises, “We are aware that the basic problem is the car as such and only later, the way it is driven”.  For this reason, car traffic in the close city centre is being successively  reduced, also in terms of deliveries (they take place there only in the morning). Consequently, services such as cargo bicycles are developing – they are used by the post office.

Pedestrians, cyclists and public transport are most important for the city. In 2018 in Vienna, 822,000 people out of 1.9 million inhabitants bought an annual ticket. The city has an extensive 850 km long public transport network which is operated by 127 bus lines. In Vienna, a total of 1,500 bikes can be rented at 120 stations and 1300 km can be covered along the longest cycle lane.

4. Balance between nature and buildings

50% of Vienna is overgrown with greenery. From forests and parks to vineyards and gardens on the Danube, these spaces offer residents many ways to interact with nature. In total, there are more than 2000 green areas in the city. It gives countless opportunities for relaxing and active outdoor activities (by the way, the city is one of the cleanest European capitals).

Vienna has been also investing in digitisation, recognising the key role it plays in the development and management of the metropolis in order to cope with so many challenges and problems. Blockchain is the key element of the Vienna digitisation initiative.

The Austrian capital uses blockchain in order to simplify and automate administrative processes. They mainly include energy reports (energy management), information on public transport routes, train timetables and voting results of nearby communities or important business registrations which need to be updated frequently. In this area, the authorities entered into cooperation with Ernst & Young (EY) in December 2017 by launching a data platform accessible to city employees and residents (built within 4 months).

“Thanks to blockchain, government employees, residents or application developers can track changes in data, so if someone changes the bus route which is linked to mapping applications, an alert can be launched ,” explains Ulrike Huemer, CIO of the city of Vienna.

Owing to this project, Vienna has become a pioneer in implementing blockchain in public administration

Finally, what is happening through all the above mentioned solutions – all the initiatives taken by the Vienna authorities are intended to improve the quality of life of the inhabitants. Vienna is recognised as a smart city not only because of modern technologies and bold decisions such as the ban on transporting children to schools but above all because of the consistently implemented strategy of building a city of happy people. This outcome is most important in the creation of smart cities of the future.

I also wish other European metropolises that are applying for this title that they always place their inhabitants at the top of the list, thinking about them not only now but also in the perspective of the next 10, 20 or 50 years.