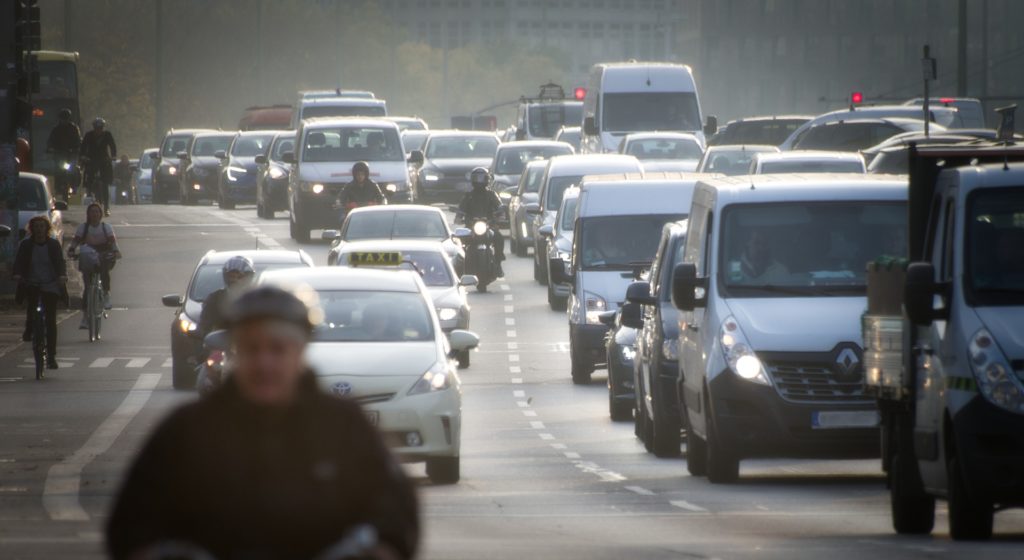 Large urban agglomerations face a formidable challenge brought on by dynamic demographic changes. According to forecasts, they will be inhabited by 2/3 of the entire human population in just three decades. Such intense urbanisation is bound to cause huge perturbations in many areas. One of them is going to be mobility. What future awaits us? Will the ideas generated by the market now be adequate to handle such problems as traffic jams, shortage of parking spaces, and notorious overcrowding and delays of the city transport? I have identified several solutions to reflect on.

Let us start with traffic jams, which plague all major cities in the world. While being stuck in them, we lose money and our health (harmful effects of noise which I discussed here), the environment suffers too (e.g. due to smog) as do fellow commuters, e.g. those who are waiting for a delayed bus.

I took a look, out of curiosity, at TomTom’s Traffic Index report, which analyses and describes the traffic situation in 403 cities from 56 countries in the world. In addition to the results, which I will present in a minute, my attention was drawn to quite an alarming statement, namely that during the latest decade traffic levels had risen across the world in almost every analysed city! Sounds unnerving? It is for you to judge.

The full report can be accessed at: https://www.tomtom.com/en_gb/traffic-index/ranking/?country=PL. Below, please find the most important if shameful statistics.

As you can see, Łódź fares the worst in Poland, it even managed to secure the 8th position in Europe’s TOP10! The congestion indicator there equals 47per cent.

I have also found additional results for Poland, this time financial ones. According to the calculations conducted for 7 large cities, we waste about 4 million Zlotys worth of petrol in traffic jams!

This is compounded by parking problems, naturally, because the number of cars and road users is constantly on the rise. It is difficult to switch to public transport, though, because it will either not take us to where we want to go, or it is so overcrowded that travelling to work in the peak-hour squeeze verges on a nightmare.

It is nice to see, however, that city authorities do try to overcome these challenges. Ideas are rife and abundant, but let us be realists: not a single one is good enough to make congestion disappear altogether. I am talking here of existing metropolises, not the newly created smart cities like Masdar, where that problem was eliminated by building an underground transport system and a fully autonomous PRT system (find out more in my post “Get to Know Masdar’).

I have collected a few ideas how to improve urban mobility below. I list the advantages and the disadvantages that I have identified for each solution. I wonder which one will appeal to you.

INVESTING IN INFRASTRUCTURE AND COMMUNICATION

Cities’ infrastructures are very stretched already, so it is difficult to imagine how they are going to cope with congestion in a few year’s time. Therefore, being confronted with road works on a daily basis should not come as a surprise, as the authorities are bracing themselves for the troubles ahead and try not to merely renovate but also to redesign streets to prepare them for future challenges. They are building ring roads, flyovers, tunnels, bridges, and bus lanes. Public transport fleets are being gradually rejuvenated to avoid potential breakdowns, and tram tracks are being repaired. Cities are promoting public transport, the use of which brings tangible savings. For example Oslo saved ca PLN 300 million over a couple of years.

Below I am presenting a couple of examples how some cities have changed after investments in infrastructure for the benefit of their residents (click here for a full review). It is a photo story that was created out of Google Street View images demonstrating the transformation of the cities. 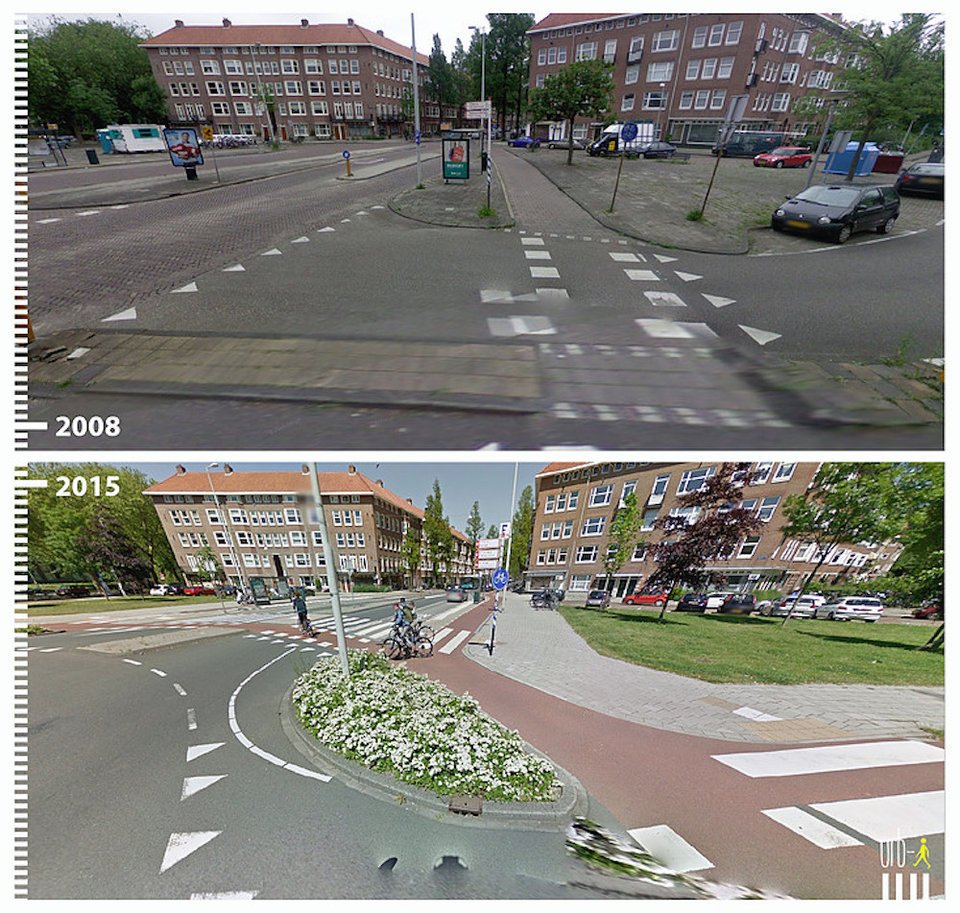 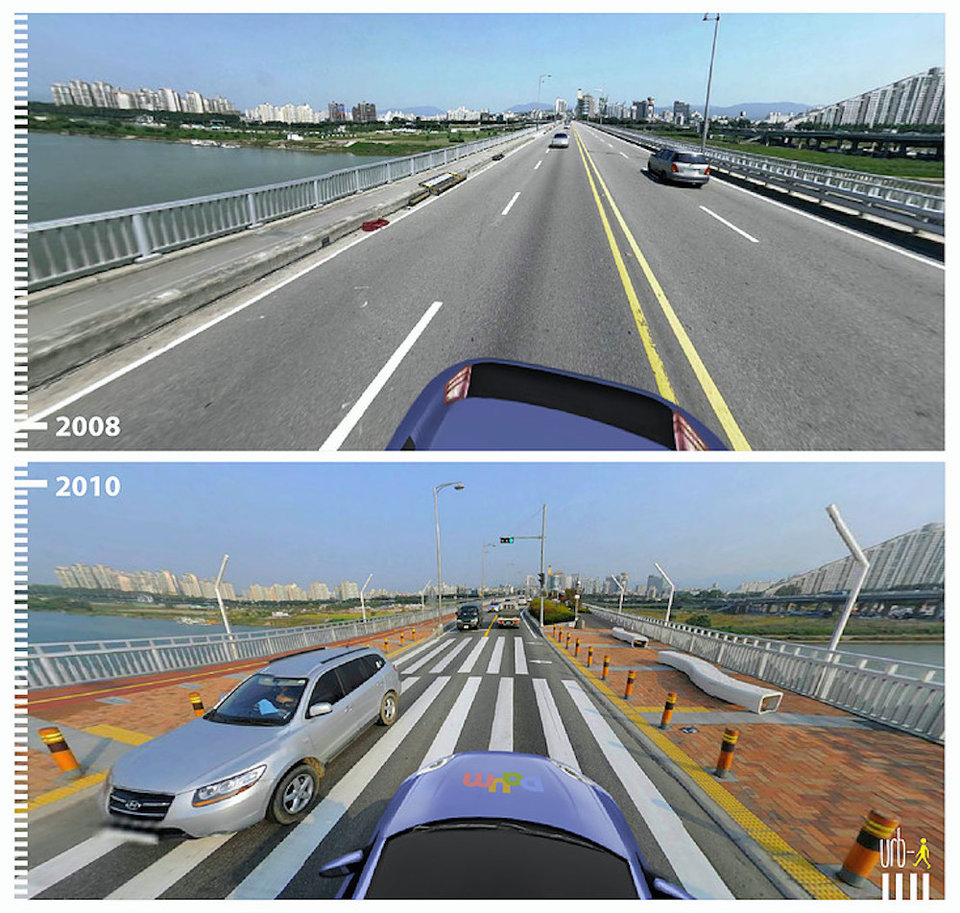 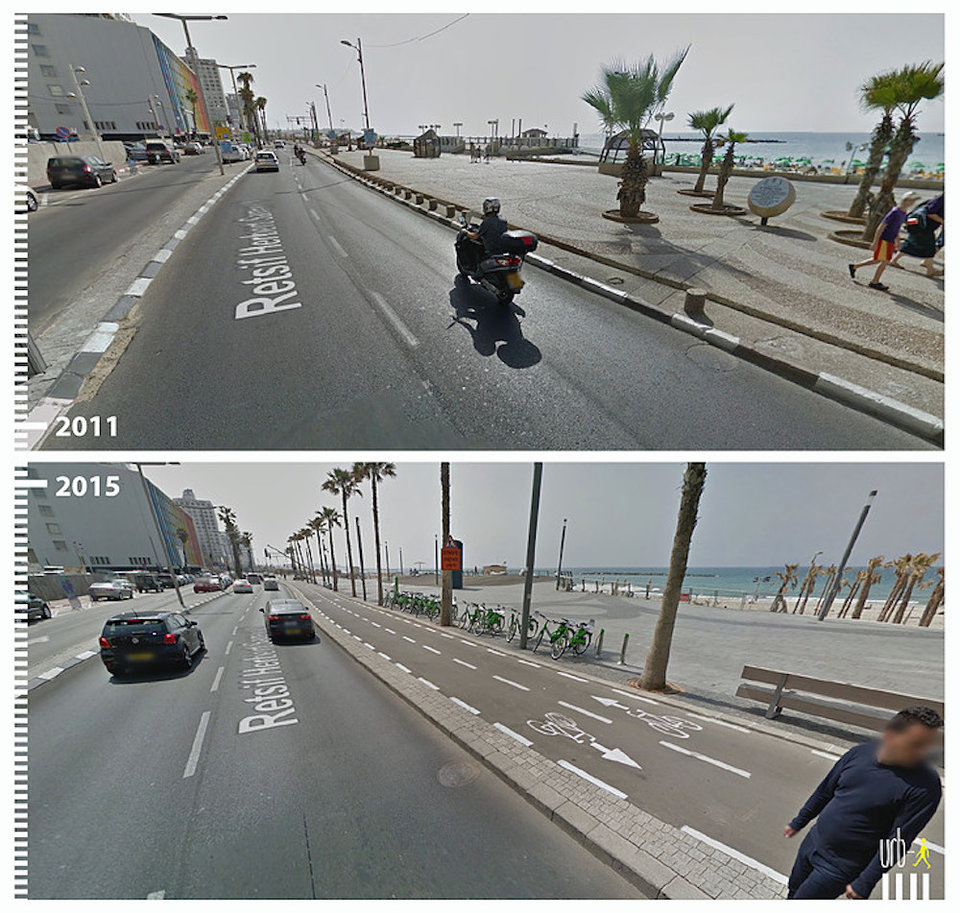 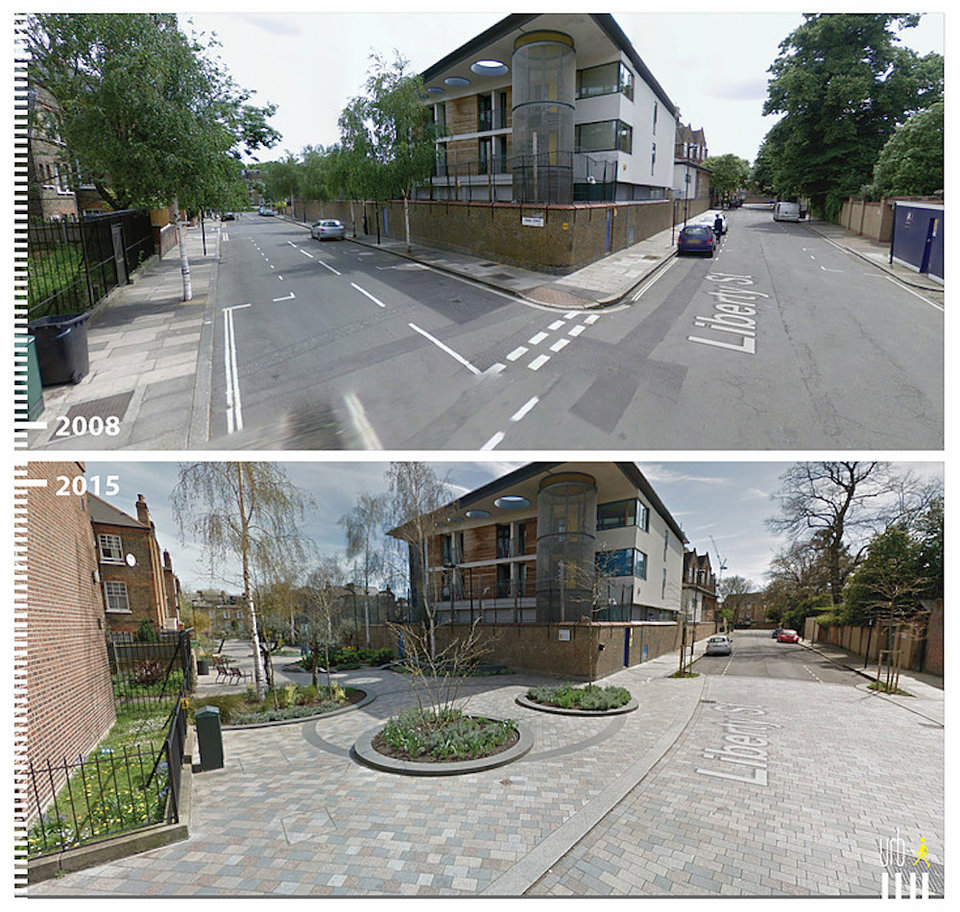 Many cities imposed speed limits of 30 km/ h in order to suppress traffic in the centre (an example followed by Poznań with its 30 Zone), raised their parking rates (when the parking rates were increased by 10 per cent in Cracow the number of cars parked decreased by 1 per cent) or banned cars from the streets of the city centre altogether (for instance in London or Paris).

Paris actually went one step further by implementing an unprecedented decision to close to the traffic one lane of the express way along the banks of the Seine throughout the summer, and dedicate another one to cyclists only. As a result, some cars switched to inbound and arterial routes along regular streets of the city.

Vienna took similar initiative and, under the “Schulstraße” project, introduced a ban on giving the children a lift to one of Vienna’s schools. As a result, the parents and children resorted to public transport, which operates flawlessly there (I wrote more about it here).

As resident numbers grow, we are starting to run out of space in the cities. This tendency did not go unnoticed, and investors started to implement sharing services and products into the city tissue: car-sharing or bike-sharing. Scooters and motorised scooters are now available for rental to move about the urban agglomeration. We do not have an idea yet how to implement the carpooling initiative in Poland – it is quite popular in the US (New York) and Denmark. 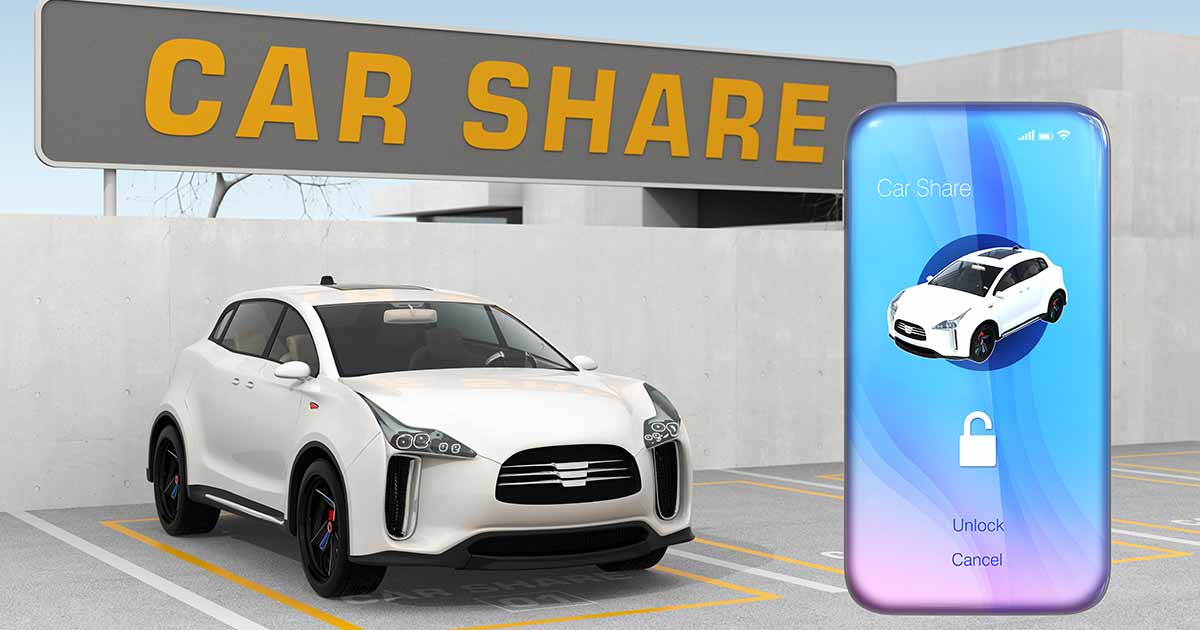 The demand for transport services is generated by the residents themselves and there are apps created that make it easy for them to move about the city. Let us mention not only jakdojade or mytaxi, but first and foremost those apps that pay special attention to integration, meaning combining the offers from different transport providers on a single platform, with a simple payment system.

The Scanadinavian UbiGo app is a perfect example. Its users have monthly plans and the more they use the services of different carriers, the more they save. The Helsinki Business Hub hosts several carriers who collaborate with the city under a subsidised social transit scheme – this service is dedicated for the elderly, who are going e.g. for a planned hospital appointment. In Denmark’s Aarhus in turn, the FluidHub acts as a platform for local public transport combined with the offer of the city’s two carpooling operators.

Air space is receiving increasingly more attention when discussing mobility, in the context of not being used much for product or people transit. Using drones in the city is not only possible, but also viable. The European Commission has only just set a legal framework for their operation, it came into force on 2 July. It will be gradually replaced by national legislation and will be important not only to the operators of such devices, but to local governments as well.

Uber Air is bracing up for the air-transport revolution already and conducting air-taxi tests (in Dallas, Los Angeles and Melbourne). The launch date is set at 2023.

I have stumbled across a solution developed by scientists from the Massachusetts Institute of Technology (MIT), the Swiss Federal Institute of Technology (ETHZ) and the Italian National Research Council (CNR), according to which traffic lights would be replaced with sensors mounted on cars, geolocation, and rapid and large-scale mathematical calculations. Cars, which will communicate with one another, will enter the junctions at safe intervals and at appropriate places and times. Take a look at the video (you can read about autonomous vehicles here).